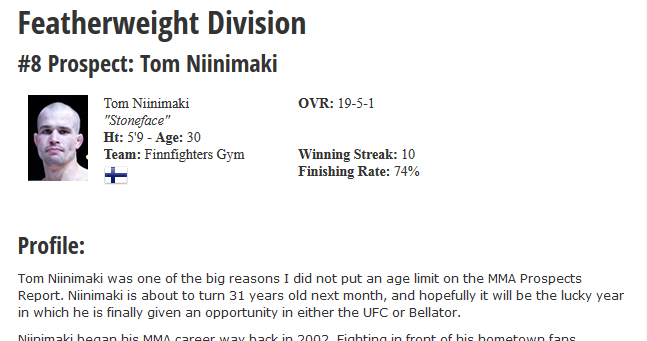 Tom Niinimaki was one of the big reasons I did not put an age limit on the MMA Prospects Report. Niinimaki is about to turn 31 years old next month, and hopefully it will be the lucky year in which he is finally given an opportunity in either the UFC or Bellator.

Niinimaki began his MMA career way back in 2002. Fighting in front of his hometown fans, Niinimaki won his first 2 fights impressively. Niinimaki’s undefeated record soon came to an end though as he lost to future UFC veteran Per Eklund. Niinimaki would lose his next fight as well before bouncing back with 7 straight wins, all coming via finish.

Niinimaki would take a significant step up in competition as he faced a quartet of Bendy Casimir, Danny Batten, Hatsu Hioki, and Tristan Yunker in 2005-2006. The results were less stellar as he he went 0-3-1 overall, effectively ending Niinimaki’s hopes as a top-flight fighter. The only saving grace was that Niinimaki was still just 23 years old at the time. Niinimaki would fight once more in 2007 before walking away from the sport citing burnout.

Over 2 1/2 years later, a promoter approached “Stoneface,” asking him if he was interested in making a comeback. Niinimaki had still been competing in grappling tournaments during his hiatus and after some pondering decided to make his return to the cage in 2010. Niinimaki showed few signs of ring rust, and with a refueled desire for fighting, he quickly ran off 5 consecutive wins in 2010, including a decision victory over recent Bellator signee Sergej Grecicho.

Tom would briefly step outside of the cage as he decided to compete in the European Championships, where he won gold in submission wrestling. Niinimaki returned to MMA in late 2011, where he defeated Johnny Frachey to extend his winning streak to 7. Tom finally made a breakthrough in gaining some stateside exposure as he began training at Blackzilians, while also earning a fight in Titan Fighting Championships against TUF 14 alumni Brian Pearman. Niinimaki methodically picked Pearman apart for 2 rounds before submitting him via rear-naked choke. Unfortunately, Niinimaki would head back to Europe without a promise for another fight stateside.

Niinimaki’s dominance on the European scene brought him some local acclaim, but he also began to find it extremely difficult to find fights. Luckily, the Finnish promotion, Cage, has provided Tom a home to showcase his skills. Following a swift submission win in 2012, Niinimaki got the step up in competition he was looking for as he faced off against WEC and Bellator veteran Chase Beebe. Outside of a couple Beebe submission attempts, Niinimaki used his entire repertoire of skills to thoroughly dominate the former WEC champion for 3 rounds to earn the unanimous decision victory.

Niinimaki fights out of FinnFighters Gym, where he is basically their only marquee fighter. He has ventured over to the Blackzilians camp as of late, which is a better sign for him in both the level of his training partners and the possible contacts the gym has with the UFC and other larger promotions in the USA like World Series of Fighting. Finland is not completely off the map as far as representation around the MMA world is concerned. Anton Kuivanen recently fought in the UFC as did Marcus Vanttinen in Bellator.

So, the biggest question surrounding Niinimaki’s prospect status is can he step up against elite-level talent. He did just claim victory over proven veteran Chase Beebe, but people have to remember that Beebe usually fights at 135 lbs., and the obvious strength advantage helped Niinimaki considerably. For Niinimaki to truly be successful at the UFC level he has to find a bigger camp that can take him to the next level. He tested the waters with the Blackzilians in 2012, and would be wise to continue exploring these types of options if he wants to build a career stateside.

Do I think Niinimaki can be a Top 10 Featherweight in the UFC? Unfortunately, no. I hope he proves me wrong one day, but from what I’ve seen of Niinimaki and other European based wrestlers and grapplers, they usually hit a wall once they sign with the UFC. Don’t get me wrong, Niinimaki is extremely talented, and he is rock solid in all areas, but that is the part that actually concerns me. He is so well-rounded that nothing actually calls out to me saying, “elite.” His submission wrestling is excellent, but I’m not sure it is on par with the best grapplers in the UFC. Part of me thinks a better option for Niinimaki may be Bellator. He could probably string together some wins there and we have seen how well a guy like Daniel Straus has done in their Featherweight Division.

Overall, Niinimaki is in the prime of his career and he deserves an opportunity to fight on a bigger stage. He is unquestionably the top European Featherweight prospect in the world today. Niinimaki is going to have to hope that the UFC comes back to Europe soon, where he would have a higher probability of getting signed. The UFC’s Featherweight Division is absolutely stacked right now, but if they were to sign Niinimaki, I think he could hold his own and not be kicked to the curb after 2-3 fights. 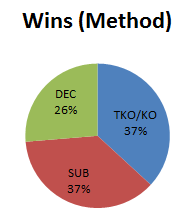