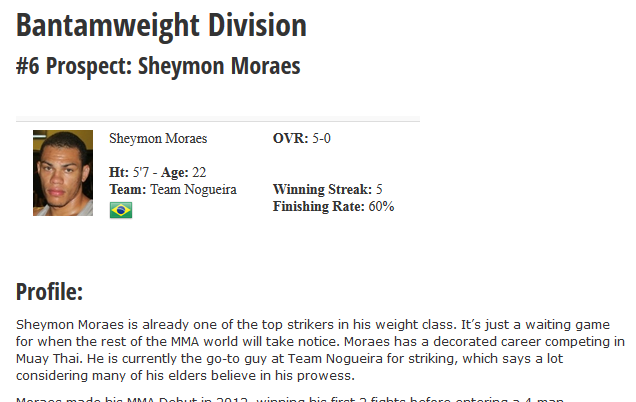 Sheymon Moraes is already one of the top strikers in his weight class. It’s just a waiting game for when the rest of the MMA world will take notice. Moraes had a decorated career competing in Muay Thai tournaments and is currently the go-to guy at Team Nogueira for striking.

Moraes made his MMA Debut in 2012, winning his first 2 fights before entering a 4-man Bantamweight Tournament in the Bitetti Combat promotion. The 1-night tournament showcased four of Brazil’s top Bantamweight fighters, including future UFC veteran Pedro Nobre. When the dust settled, Sheymon Moraes, the least experienced fighter of the bunch, came out with his hand raised, earning TKO finishes over Pedro Arrude and Nobre, to win the Bitetti Combat Bantamweight Championship.

Moraes competed once more in 2012, defeating Eliel dos Santos via decision. Moraes has not competed in 2013, though he has been busy helping coach Antonio Rodrigo Nogueira’s team on The Ultimate Fighter: Brazil 2.

Moraes has outstanding connections thanks to his close association with Team Nogueira. Moraes has already competed under the Bitetti Combat banner, which is one of the premier organizations in Brazil. Moraes’ training partners are some of the best in the world and he has spent considerable time on his wrestling and ground game while there. If you ask any member of their team, they all consider Moraes to be a future champion.

To make this crystal clear, Moraes’ striking would literally be the best in the UFC’s Bantamweight Division if he were to sign tomorrow. His Muay Thai, quickness, and chin are truly that good.

Sheymon Moraes is only 22 years old, but he is likely on the radar of both the UFC and Bellator. Moraes has gone about his MMA career in a very calculated fashion. He aligned himself with arguably the best team in Brazil, and has already claimed Bitetti Combat’s Bantamweight Championship. Moraes has stayed busy with his coaching duties at Team Nogueira, which has also allowed him to concentrate on his training rather than rattle off a bunch of wins and never improve upon his overall skill set.

It’s only his ability to stop the takedown and lack of experience that worry me at this point. There are a ton of solid fighters on the Brazil regional circuit, and Moraes would be wise to test his skills against more experienced competition before being thrown to the wolves by the UFC.

I don’t think he is invincible at this point. His wrestling and clinch work are still at ground level as far as comparing him to UFC competition, but I’d be lying if I didn’t say that Moraes reminds me a lot of a younger Jose Aldo. If he can continue to improve his ground game, which has already looked better in just a few short months, he should project to be a future title contender and possibly a champion one day at 135 lbs. 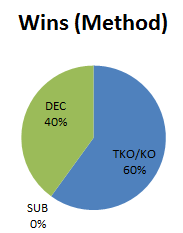