Rick Glenn’s record according to the leading MMA databases is filled with confusion. Both Sherdog and Mixedmartialarts.com have Glenn making his debut in 2006. Mixedmartialarts.com claims it was his amateur debut, and that Glenn did not turn professional until 2009. That could be the likely scenario since Glenn would have only been 16 years old for that debut fight. It is also rumored that Glenn went 15-0 as an amateur and 13-2-1 professionally according to one of his training partners.

The whole thing is confusing, but regardless of that headache, here is what we do know. Rick Glenn is a legitimate prospect that is capable of finishing fights with his hands, elbows, or knees. Glenn started his MMA career at a very young age, which I mentioned above. In 2010, following a close decision loss that dropped his record to just 2-3 overall, Glenn started to see his luck turn around. Competing primarily in the Midwest Cage Championship promotion, Glenn won 4 straight fights and would go on to capture their Featherweight title. After a close title defense against UFC and Bellator veteran Ryan Roberts, which ended up in a draw, Glenn bounced around promotions from King of the Cage to Wisconsin’s NAFC. Regardless of what promotion Glenn was fighting for, the result was the same as he continued racked up wins and soon gained some traction as a prospect to watch.

Canada’s Score Fighting Series soon signed Glenn to a contract in 2012. Glenn impressively defeated two tough Canadians Lyndon Whitlock and Tristan Johnson before leaving the promotion to sign with recent upstart World Series of Fighting (WSOF). Glenn made his WSOF debut against undefeated Brazilian prospect Alexandre Pimentel. Pimentel was able to edge ahead early due to his grappling and a 2nd round knockdown, but Glenn stayed patient and eventually scored a come from behind victory via knockout.

Rick Glenn trains out of Roufusport alongside big show veterans Anthony Pettis, Erik Koch, and Alan Belcher. It is Roufusport’s newest addition, Bellator Welterweight Champion Ben Askren, that may end making the most difference in Glenn’s ability to beat elite-level competition. Dick Roufus is obviously a master of striking, but many of his fighters have fallen victim to superior wrestlers. Hopefully Askren’s arrival has helped Glenn improve his overall takedown defense and general awareness of what it will take to compete with world class wrestlers such as Askren.

Rick Glenn reminds me a lot of his training partner Erik Koch. Koch is a more explosive athlete, but the similarities in size, reach, and striking styles are apparent. Glenn’s potential will ultimately come down to whether he is able to keep his fights standing. We saw him struggle with Pimentel’s grappling in his last fight, and that does not pose well for Glenn’s future chances against elite-level competition in the UFC or Bellator.

Glenn is a dangerous striker, who is capable of finishing a fight at any moment. We have seen fighters like Koch and George Roop have good success in their respective weight classes due to the unique size and reach advantages they possess while striking. If Glenn can continue to work on the effectiveness of his jab and leg kicks in order to maximize his reach differential, he could turn out to be a legitimate threat. As of now though, expectations are tempered due to his ground game.

Glenn is currently competing in WSOF and it is now rumored that there is not an out clause should the UFC or Bellator come calling. On the other hand, WSOF is an ideal place for Glenn to refine his talents and continue to test his skills against stiffer competition. His last opponent, Pimentel, was a legit prospect, and if Glenn can win 1-2 more fights in similar fashion, I would not be surprised to see either the UFC or Bellator come calling once his WSOF contract expires.

Glenn is only 24 years old and his career truly looks to be on a permanent upswing. Roufusport is an ideal location for a fighter like Glenn, and I believe the the sky is the limit if he can keep improving upon his overall skill level. 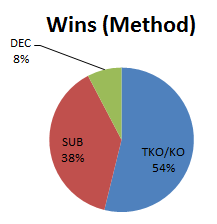