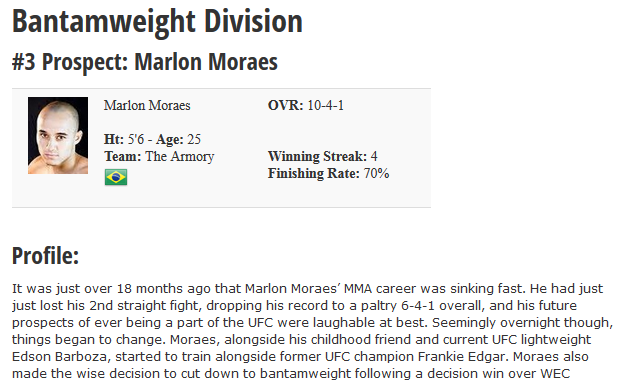 It was just over 18 months ago that Marlon Moraes’ MMA career was sinking fast. He had just just lost his 2nd straight fight, dropping his record to a paltry 6-4-1 overall, and his future prospects of ever being a part of the UFC were laughable at best.

Seemingly overnight though, things began to change. Moraes, alongside his childhood friend and current UFC lightweight Edson Barboza, started to train alongside former UFC champion Frankie Edgar. Moraes made the necessary career decision to cut down to 135 lbs. He was soon stunningly offered a chance to fight Miguel Torres in The World Series of Fighting’s inaugural event. The overall whirlwind of positive results fell like dominoes as Moraes has gone 3-0, with 2 knockouts and a decision victory over former WEC champion Miguel Torres.

It wasn’t always so easy for Moraes though.  He made his MMA debut in 2007, fighting in his native Brazil. Moraes had previously competed in Muay Thai tournaments, but also possessed a slick BJJ game that not many fans had witnessed. He started 3-0, before being called up to Brazil’s prominent Shooto-Brazil promotion. Moraes struggled to compete against higher-level competition as he lost back-to-back fights, each via TKO.

Moraes fought twice more in Brazil, going 1-0-1, before moving to Florida with Barboza to train at The Armory. Moraes’ career seemed to be on the upswing as he submitted his next 2 opponents, but just 2 weeks after winning that 2nd fight in a row, he accepted a short-notice fight with Ralph Acosta and lost via submission. 6 months later, Moraes received a huge opportunity to face experienced WEC veteran Deividas Taurosevicius for  a chance at winning The Ring of Combat Featherweight Championship. Moraes showed off some ultra-impressive BJJ, nearly submitting his black belt opponent, but he ultimately allowed Taurosevicius to escape from a rear-naked choke and was submitted himself just a few seconds later.

The loss was a huge learning moment for Moraes as he soon made the necessary changes towards achieving his current MMA success. Following a win over WEC veteran Chris Manuel, Moraes dropped down to 135 lbs. and knocked out Jarrod Card. That KO win was showcased on HD Net’s Inside MMA, and must have caught the eye of World Series of Fighting (WSOF) as Moraes was surprisingly tapped as Miguel Torres’ debut opponent for WSOF 1.  Moraes proved that his past record was not a reflection of his current skill set and out-struck Torres for nearly all 3 rounds to earn the decision. A few months later WSOF matched Moraes against recent signee Tyson Nam, who was fresh off an upset win over Bellator Bantamweight Champion Eduardo Dantas. Moraes made quick work of Nam at WSOF 2, knocking him out in the 1st round.

Moraes now trains at Ricardo Almeida Jiu-Jitsu and Valor MMA alongside Edgar and Barboza. Moraes’ camp and training partners have connections to both the UFC and Bellator. Moraes’ recent improvements and wins should be more than enough evidence that whatever he has done over the last 18 months is working. Sparring and grappling with Frankie Edgar should make Moraes ready for any Bantamweight that comes his way.

Moraes is only 25 years old and just seems to be hitting his stride. Moraes has stated in recent interviews that he is in no hurry to sign with the UFC or Bellator. He is perfectly happy with WSOF and what they have done for his career already. As mentioned previously, it was only a short while ago that Moraes was struggling to win fights, so he still may be trying to build up his confidence and experience.

There is not much upside for Moraes staying with WSOF at this point though. He has beaten their two best fighters and his only challenges left would be possibly waiting around to win their yet to be debuted championship title. Regardless, Moraes has to be on the radar for the UFC and Bellator. Both promotions are hungry for Bantamweight talent, and the way Moraes fights, he should be a force wherever he signs. 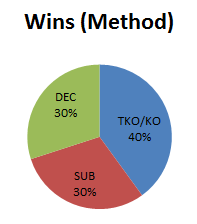