Magomed Malikov was born in a small village located in the Dagestan region. There were no official sports clubs or facilities where he grew up and did not even discover the sport until his first year in college. He immediately immersed himself in athletics, training in boxing and wrestling where he became a champion in hand-to-hand combat. He served a brief stint in the army from 2005-2006 and soon ventured over to MMA in 2007. Malikov only ended up training for about 6 months as he took a 2 year hiatus due to what he described as “personal reasons.”

Upon his return in 2009, Malikov joined up with the newly formed Highlander team. Just one year later he went on to make his MMA debut in a 4-man, 1-night tournament. Malikov punched his way through the tournament, finishing both opponents via KO/TKO. He quickly stepped up his competition level, defeating veteran Dmitry Poberezhets via 1st round TKO before falling to Light Heavyweight prospect Baga Agaev.

Malikov went without a fight for over 6 months, but soon accepted a spot in another 4-man, 1-night tournament. Malikov was considered an underdog coming in, but after finishing Bellator veteran Alexey Oleinik, he quickly started to earn respect as one of Russia’s top Heavyweight prospects. Malikov went on to win the tournament, and ultimately signed with the M-1 promotion just a few months later.

M-1 was desperately searching for a last minute replacement to fight PRIDE veteran Aleksander Emelianenko. Malikov shocked all those in attendance by knocking out the feared striker in just 23 seconds. M-1 quickly looked to propel Malikov towards a title shot against their American interim champion Kenny Garner. Malikov looked to strike early and often, but Garner relied heavily on his takedowns and eventually tired down Malikov enough to finish him in the 3rd round.

Malikov’s title bid ended in embarrassing fashion as Malikov simply did not have the wrestling or conditioning needed to unseat Garner. After taking nearly a year off, Malikov looked to step back into the cage as a participant in M-1’s upcoming Heavyweight tournament. Malikov was set to face Jeff Monson in the opening rounds, but Monson was forced off the card due to injury. In stepped, Nikita Krylov, but he was soon pulled from the event after signing with the UFC. Malikov would have to wait another 2 months before getting to finally face off against well-traveled veteran Jeff Monson. Malikov opened up a cut on Monson early, and despite once again struggling to stay on his feet, he was awarded the victory due to doctor stoppage.

Malikov trains out of the Highlander Gym, which is home to other M-1 stars Rashid Magomedov and Magomed Sultanakhmedov. The camp is mostly known for its striking and has yet to send one of their fighters stateside to either the UFC or Bellator, though most of their top fighters have found homes at various Eastern European promotions.

Magomed Malikov is about as heavy handed as they come in the Heavyweight division. He swings with reckless abandon and more times than not his opponent is likely to be falling towards the canvas. Malikov’s striking power is not to be disputed. What does come into question is Malikov’s overall skill level and his lack of elite size.

Malikov is a bowling ball of power. He in some ways reminds me of Igor Vovchanchyn and Fedor Emelianenko. Both possessed rare knockout power despite not looking like a well-chiseled athlete. What Malikov has is functional strength, and he is able to channel all of that into his punches. He has a vicious right hand and usually attacks with huge hooks and uppercuts. Malikov has shown a decent ability to scramble back to his feet, but more often than not, he has struggled to stay upright against decently skilled grapplers.

Malikov has a ton of holes in his overall game. I would venture to say that Malikov’s striking defense, conditioning, grappling, and takedown defense are probably the worst of any Top 10 prospect I profiled throughout this process. Malikov’s striking defense is atrocious. He regularly drops his hands and shows little footwork or head movement. Malikov’s conditioning goes out the window after the 1st round. He is still capable of knocking you out, but he is just a sitting target that lumbers around looking for the homerun shot. Against most UFC Heavyweights that simply won’t fly, though Soa Palelei vs. Nikita Krylov sort of spoiled that perception. His ground game is serviceable. He usually relies on his power to muscle out of submissions, but he’s usually helpless from his back.

Malikov is a bear of a fighter, but he likely needs to consider a move down to Light Heavyweight if he ever wants to reach his true potential in the sport. Watching his fights with Garner and Monson, it’s a shame watching all of that potential being wasted away because of Malikov’s conditioning and lack of size.

There are a ton of reasons, why Malikov will not make it in the UFC. Yet, I still keep coming back to his raw KO power. It truly is a feat to see and after watching Mark Hunt resurrect his career with a similar skill set, there is some hope that Malikov can round out his overall game and be a future force. Malikov is not a polished prospect by any means, but he has the power to go in and finish any Heavyweight in the world today.

Finish victories over Aleksander Emelianenko, Jeff Monson, and Alexey Oleinik have likely earned Malikov at least a look from the UFC or Bellator. Due to Malikov’s association with M-1, he probably won’t be leaving them any time soon, but if he does eventually sign with the UFC or Bellator, he could have an immediate impact. In Bellator, outside of Vitaly Minakov, I could easily foresee Malikov coming in and wrecking shop. In the UFC, it would likely be a stiffer challenge due to most of their roster having the grappling skills to take Malikov off of his feet. Nonetheless, if any heavyweight, regardless of promotion, chose to stand and trade with Magomed Malikov, my bet would be that Malikov would be the last man standing. 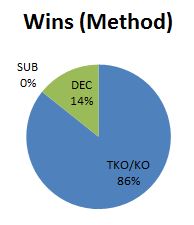