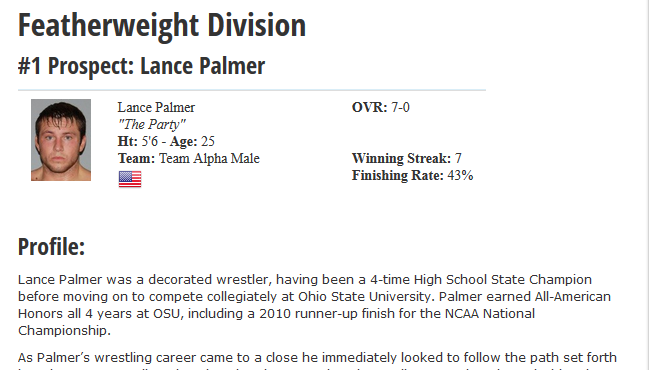 Lance Palmer was a decorated wrestler, having been a 4-time High School State Champion before moving on to compete collegiately at Ohio State University. Palmer earned All-American Honors all 4 years at OSU, including a 2010 runner-up finish for the NCAA National Championship.

As Palmer’s wrestling career came to a close he immediately looked to follow the path set forth by former OSU wrestlers Mark Coleman and Kevin Randleman. Palmer brought his talents to Sacramento, CA where he began training at Team Alpha Male. Palmer immediately got to work, making his official MMA debut in 2011. Palmer won his first 4 fights, increasingly stepping up his level of competition until signing with Resurrection Fighting Alliance (RFA) in 2012.

Palmer’s hype was finally put to the test against UFC veteran and BJJ expert Fredson Paixao at RFA 4. Palmer started out strong, using his wrestling and timely striking to keep Paixao from landing any significant offense of his own. In the 3rd round, Palmer once again took the fight to the floor, but was opened up by one of Paixao’s elbows from the bottom. Palmer was able to hold on for the decision win, but it ended up being a much closer bout than it should have been.

Palmer made quick work of his next opponent in Utah’s Showdown Fights promotion before once again competing under the RFA banner. This time Palmer would be fighting for RFA’s Featherweight Championship, which was held by fellow prospect Jared Downing. Palmer started off a bit slow, but he eventually went back to his wrestling roots and simply outworked Downing for a decision victory.

Palmer trains out of Team Alpha Male, which is home to many of the world’s best lighter weight fighters. Palmer nearly chose American Kickboxing Academy, but upon visiting Team Alpha Male, it was an obvious match that Palmer seemed destined for. His BJJ has made noticeable strides in the last few months, and with the recent addition of striking coach Duane Ludwig, Palmer’s striking should improve as well. Palmer emulates many of the trademark qualities of his fellow training training partners Urijah Faber, Chad Mendes, and T.J. Dillashaw.

Lance Palmer is UFC-ready at this point in his career. Some may argue that his split decision victories over Downing and Paixao in RFA were hardly reflective of a top-flight prospect and possible future UFC contender. Yet, the fact remains that Palmer is 7-0 and his wrestling will make him a force wherever he signs. The UFC’s Featherweight Division is extremely deep, but we have seen fighters like Nik Lentz and Darren Elkins rise up the ranks on the strength of their wrestling. There is absolutely no reason that Palmer could not do the same.

The lingering questions I have about Palmer’s future are the possible roadblocks of fellow training partners in his division as well as his lack of striking. Palmer wrestled at 149 lbs. in college, so it is doubtful that he could ever make the cut down to Bantamweight, but depending on which MMA database you look at, his height is listed between 5’4 and 5’6. That would make him one of the shortest fighters in the division, and this lack of reach does him no favors in the striking department, where he is forced to lunge with his punches in order to hit his target. Palmer’s striking has not proven to be as effective as some of his fellow brethren at Team Alpha Male.

Speaking of Team Alpha Male, could there simply be too many fighters in the UFC’s Featherweight and Bantamweight Divisions for Palmer to possibly consider singing with Bellator. Thus far most of Team Alpha Male’s fighters have steered clear of Bellator, but Palmer could look to carve out his own path, separate from the one UFC stars Urijah Faber, Joseph Benavidez, Chad Mendes, and T.J. Dillashaw have taken.

My inclination is still leaning towards Palmer signing with the UFC in the very near future. He has a charismatic personality and he should be able to continue and make the necessary improvements towards building up his overall skill set in order to make him a future Top 10 Featherweight. For those that don’t agree, please once again take notice that Nik Lentz is currently a Top 10 Featherweight, and that is not due to his striking or submission skills, it is simply based off his wrestling and grinding style, both of which Palmer possesses. 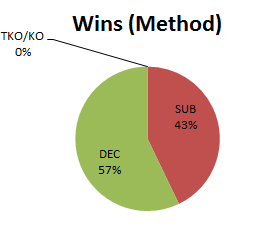