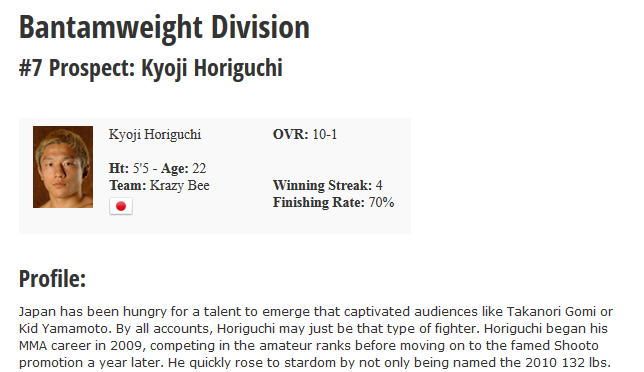 Japan has been hungry for a homegrown talent to emerge that captivated audiences like Takanori Gomi or Kid Yamamoto. By all accounts, Horiguchi might just be that type of fighter. Horiguchi began his MMA career in 2009, competing in the amateur ranks before moving on to the famed Shooto promotion a year later. He quickly rose to stardom by not only being named the 2010 132 lbs. rookie champ, but by also winning the tournament’s MVP award.

Horiguchi won his next 3 fights via KO/TKO before being chosen to face Japanese veteran and former Shooto champion Masakatsu Ueda in his Ueda’s final Shooto fight before leaving to fight in Bellator. It was a back and forth fight that Ueda ultimately won due to his superior grappling. Horiguchi had his moments in the fight, including a knockdown in the final round, but he could not keep the fight standing and lost via split decision.

Horiguchi bounced back with 2 more wins in Shooto before squaring off against recently-released UFC veteran Ian Loveland in the Vale Tudo Japan promotion. It was a back-and-forth fight in which both fighters were close to finishing the fight. Horiguchi nearly scored a knockout in the 1st round, but ended up holding on to eek out a unanimous decision victory as his grappling nearly cost him another victory.

Horiguchi returned back to Shooto where he captured the promotion’s Bantamweight (132 lbs.) Championship by submitting Hiromasa Ogikubo. He is set to face fellow prospect and Pancrase champion Shintaro Ishiwitari later on this month in the Vale Tudo Japan promotion.

Horiguchi trains at the Krazy Bee camp alongside Japanese stars: Kid Yamamoto, Atsushi Yamamoto, and Kotesu Boku. Horiguchi’s camp has close connections to the UFC and One FC. Though the camp has had a bit of drop off in recent years, it is still considered one of the premier camps in all of Asia.

Kyoji Horiguchi looks to be Japan’s next big star. At just 22 years of age, he is already on the radar of the UFC and Bellator. He has trained closely with Kid Yamamoto over the years and should be adequately schooled in what it will take to compete at the UFC level. The concerning part of Horiguchi’s fight game is his size and grappling. His takedown defense is solid for the most part, but his aggressive striking style leaves him wide open for takedowns. If he expect to compete at the elite level in the UFC, he will have to seriously address these issues.

Also, should Horiguchi sign with the UFC, he will likely need to cut down to Flyweight immediately. He is only 5’5 and though his speed would be an asset at 135 lbs., he would simply be giving up too much size. Horiguchi is a skilled striker and could really make some waves in the UFC. His success will ultimately come down to whether he is able to keep his fights standing. We have all recently witnessed how Conor McGregor lit a fire under Irish MMA. Horiguchi could do just that for Japanese MMA, which has lost out on some of its popularity over the years. 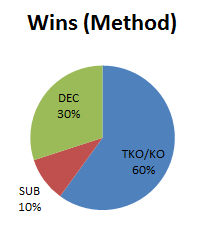