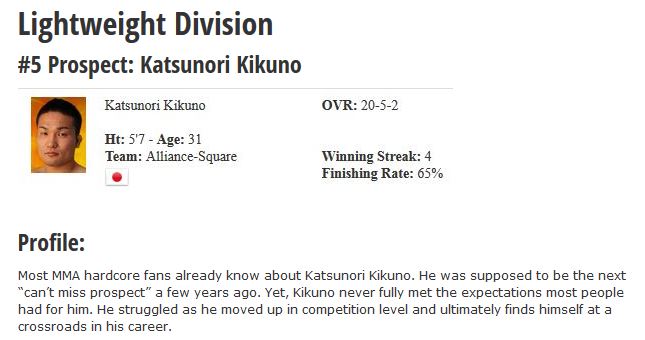 Most MMA hardcore fans already know about Katsunori Kikuno. He was supposed to be the next “can’t miss prospect” a few years ago. Yet, Kikuno never fully met the expectations most people had for him. He struggled as he moved up in competition level and ultimately finds himself at a crossroads in his career.

Kikuno seemed destined for martial arts greatness at an early age. He trained in Judo before finding a knack for Kyokushin Karate. Kikuno dedicated himself towards becoming one of Japan’s top practitioners, training exclusively in the art for nearly 5 years.

In 2005, Kikuno decided it was time to test his Karate skills in MMA. Equipped with a deadly crescent kick, Kikuno won the DEEP: 2005 Future King Tournament by finishing both of his opponents in the 1st round. Kikuno’s quick rise was soon stifled by a decision loss to Yukinari Tamura. Over his next few fights Kikuno struggled at times to apply his karate skills as many of his opponents looked to bring the fight to the ground. Nonetheless, Kikuno was able to build an 8-fight win streak over the next 3 years, capped off by a dominating 1st round knockout of former prospect Koichiro Matsumoto, which won him the vacant DEEP Lightweight championship.

Kikuno would not stay around to defend the DEEP title as he signed with Japan’s premier promotion, DREAM. Kikuno’s debut was much anticipated as some insiders felt that Kikuno had championship potential. He did not disappoint as he finished Brazilian Andre Amado in the very 1st round.

Kikuno would finally get to test his skills against a world-ranked opponent as Bellator allowed its Lightweight champion Eddie Alvarez to compete once more in DREAM. Kikuno arguably won the 1st round, but in trademark Alvarez fashion, he was able to shake off the cobwebs and storm back to win via submission. The loss did nothing to lessen Kikuno’s status as one of Japan’s top lightweights, if anything Kikuno’s stock was now at an all-time high.

Kikuno’s hype continued to grow as he knocked out UFC veteran Kuniyoshi Hironaka at DREAM 13. Kikuno would once again get an opportunity to face an elite-level talent as J.Z. Cavalcante was returning from injury. The time seemed ripe for an upset, but Kikuno was unable to keep the fight standing. Cavalcante used his wrestling and grappling advantage to grind out a unanimous decision. DREAM began having problems staying afloat and Kikuno would eventually return back to his former stomping grounds, DEEP.

Kikuno made his first DEEP title defense as he survived a late scare from Nobuhiro Oibya to win via decision. Kikuno competed for the final time in DREAM, defeating Daisuke Nakamura in a very underwhelming performance. Some of Kikuno’s hype had started to fizzle by the time he stepped into the ring with Sengoku champion and future UFC Featherweight Mizuto Hirota. Kikuno was thoroughly beaten to the punch by Hirota and lost his DEEP Lightweight crown as Hirota took home a unanimous decision victory.

Kikuno was able to rebound a few months later against Kwang Hee Lee before coming up short to Japanese veteran Satoru Kitaoka. Kikuno has since won 4 straight fights, his last 3 via knockout.

Kikuno has been training for over 8 years at Alliance-Square under the tutelage of former PRIDE and UFC veteran Tsuyoshi Kosaka. Some have wondered whether Kikuno needs to change things up in his training, but at this point he seems unlikely to ever leave the confines of his home gym. Kikuno has been able to improve his overall grappling over the years, but it is still the main culprit for his losses. Alliance-Square has never sent one of its fighters to the UFC or Bellator.

Katsunori Kikuno was thought to be Japan’s next big thing. He was also supposed to help fuel the surge of traditional martial arts back to MMA. Neither have happened, yet it will be a shame if stateside fans never get to experience one of Kikuno’s crescent kicks in the cage.

When Kikuno is the aggressor and is dictating the flow of the fight, he is an extremely dangerous fighter.  Unlike Lyoto Machida, Kikuno is more of a pressure fighter with his Karate. He uses his kicks to continually close the distance and has a rare ability to generate power with either leg. He also has a sneaky, powerful right hand. Kikuno has developed a solid clinch game and some decent takedowns over the last few years, but he can hardly be described as an offensive threat from either position.

Kikuno is clearly one of Japan’s top fighters, but in order for him to take the next step in his career, he simply has to fight a smarter style. If he is going to stick with his current striking style he has to become more elusive. Standing straight in front of his opponent with his hands down may work on occasion, but it is unlikely to prove dependable against high level competition. Kikuno’s stance also does not lend itself towards defending takedowns. Kikuno’s submission defense has held up against some of the top ground fighters in the world, but he simply cannot win fights when he is on his back.

If he were to enter the UFC, I believe his fate will ultimately be tied to how well he can defend the takedown. For this reason, I think Kikuno would likely find himself outside the Top 25, but there are plenty of UFC Lightweights who would likely be willing to stand with Kikuno. Fights with Sam Stout, Spencer Fisher, Edson Barboza, or K.J. Noons all sound like entertaining affairs that could ultimately put Kikuno on the map.

The question is, will Kikuno ever get the opportunity? The UFC usually likes to sign Asian talent when they are heading to that region. There are also rumors of a possible Ultimate Fighter: Japan in the very near future. Both scenarios could see Kikuno being signed by the UFC. Kikuno is fully capable of winning at the UFC level, but it’s just going to come down to the matchups he receives and whether he can capitalize on those opportunities. One thing is for certain, if Kikuno can find his rhythm offensively, he is a legitimate threat to win “Knockout of the Night” any time he is fighting on the card. 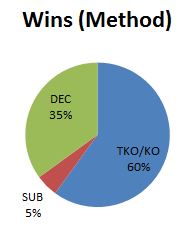