Notice: Function WP_Scripts::localize was called incorrectly. The $l10n parameter must be an array. To pass arbitrary data to scripts, use the wp_add_inline_script() function instead. Please see Debugging in WordPress for more information. (This message was added in version 5.7.0.) in /var/www/wp-includes/functions.php on line 5835
 Justin Gaethje : MMA Prospects Report 2013 - Ranking MMA 
Notice: A non well formed numeric value encountered in /var/www/wp-content/themes/mma-sport-magazine/inc/live-style.php on line 40 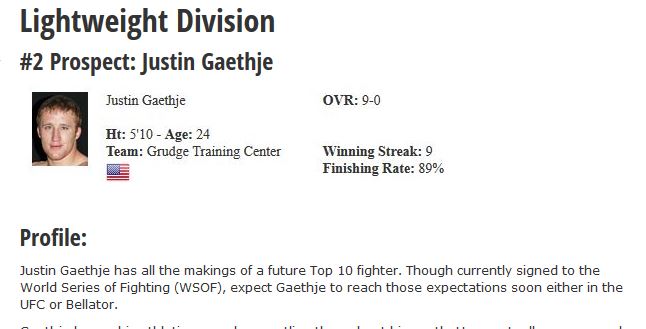 Justin Gaethje has all the makings of a future Top 10 fighter. Though currently signed to the World Series of Fighting (WSOF), expect Gaethje to reach those expectations soon either in the UFC or Bellator.

Gaethje began his athletic career by wrestling throughout his youth. He eventually won a couple of state titles before enrolling at Northern Colorado University. Gaethje went on to reach All-American status, while also dabbling with a possible transition to mixed martial arts. Gaethje began competing in the amateur MMA ranks while still in school, quickly building a spotless record of 7-0.

In 2011, following his college graduation, Gaethje officially turned pro. He started his career with 3 straight TKO/KO finishes, including a knockout slam of featherweight prospect Kevin Croom. Gaethje moved on to win a decision over fellow top prospect Marcus Edwards and soon followed that up with 3 consecutive finishes in the Rage in the Cage promotion, including a 12-second knocked of UFC veteran Drew Fickett.

Gaethje went on to sign with the upstart promotion, World Series of Fighting. In his first fight with the promotion at WSOF 2, Gaethje put on a clinic against PRIDE  and Strikeforce veteran J.Z. Cavalcante. Though the fight was stopped due to a cut, Gaethje was able to show throughout their fight that he was unafraid to go toe-to-toe with the former Top 10 Lightweight.

Gaethje’s next fight came against gritty wrestler and UFC veteran Brian Cobb, who had just beaten Ronys Torres at WSOF 1. Gaethje started out strong, nearly finishing the fight on multiple occasions, but Cobb used his veteran savvy to mount a comeback in Round 2 as Gaethje began to tire. Gaethje showed his own resilience by battling back in the 3rd round with the fight possibly up for grabs. Gaethje’s onslaught of leg kicks eventually forced Cobb unable to continue.

Gaethje trains out of Grudge Training Center, which is home to some of the sport’s top talent in the world. Shane Carwin, Brendan Schaub, Brandon Thatch, and Eliot Marshall are just a small sampling of the fighters training out of Grudge, which is overseen by head coach Trevor Wittman. It is very obvious to see the improvements that Gaethje has made from a fight to fight basis. Wittman has raved about Gaethje’s potential, which should speak volumes considering Wittman’s past experience around world class fighters at Team Jackson.

In less than a year’s time, Gaethje went from virtually an unknown prospect to blasting through respected veterans J.Z. Cavalcante, Brian Cobb, and Drew Fickett. Gaethje has cemented his status in the World Series of Fighting as their top Lightweight prospect, and quite possibly their top Lightweight overall. That is a great achievement for Gaethje considering WSOF has some of the best free agent talent in the sport. Yet, now it seems that Gaethje is ready for a new challenge, one that WSOF cannot provide him.

Gaethje is still just 24 years old, so his time in WSOF was an ideal place to gather more experience against veteran competition. Though his contract with WSOF has not expired, it’s all but guaranteed that he will eventually sign with the UFC or Bellator. WSOF did just sign Tyson Griffin and also has Jacob Volkmann on the roster, both of whom could be likely opponents for Gaethje’s next fight. The hope is that Gaethje will not be locked into a contract with WSOF should he eventually win their yet to be debuted Lightweight title.

Gaethje is a super aggressive fighter with excellent wrestling and power in his hands. He has a huge right hand and also attacks with knees and leg kicks. He is one of the most impressive prospects I have seen in quite some time that has a full arsenal of fight-ending weapons. He is very similar to Nate Marquardt in the way that he attacks and the aggressive nature in which he throws his strikes.

The drawback with being so powerful and aggressive is that he has shown some conditioning issues. I would consider this a minor issue because Gaethje is still learning his way as a professional and really just experienced adversity for the first time against Cobb. Gaethje’s submission defense and overall ability to work from his back are also in need of some further refinement, though he has passed all of the tests thus far. When he eventually signs with the UFC and moves up his competition level, he will have hopefully addressed these shortcomings.

With his wrestling background and explosive striking, Gaethje should be able to hold his own right now against current Top 25 fighters Gleison Tibau, Jamie Varner, or Evan Dunham. I would hate for Gaethje to be rushed at this point in his career, but his skill level will probably dictate just how fast he moves up the ranks. We have seen a guy like Khabib Nurmagomedov quickly rise through the Lightweight division and Gaethje is fully capable of doing the same.

Most incoming Lightweight prospects eventually hit a road block in the UFC’s ultra-deep Lightweight division. In Gaethje’s case, I don’t see any foreseeable cause for those types of concerns. I fully expect him to go in and make his mark in the division and it would be no surprise to me, to eventually see him fighting for a title a few years from now. 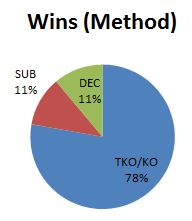