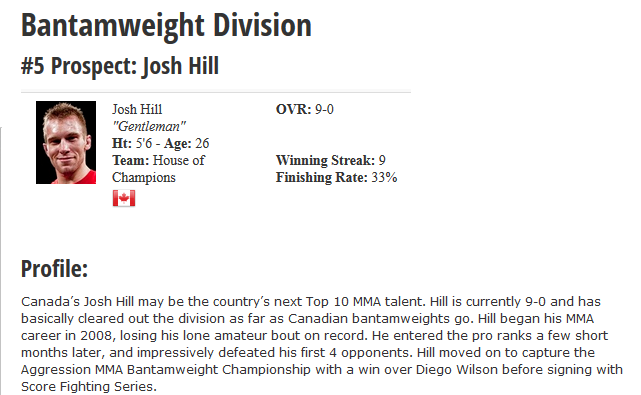 Canada’s Josh Hill may be the country’s next Top 10 MMA talent. Hill is currently 9-0 and has basically cleared out the division as far as Canadian Bantamweights go.

Hill began his MMA career in 2008, losing his lone amateur bout on record. He entered the pro ranks a few short months later, and impressively defeated his next 4 opponents. Hill moved on to capture the Aggression MMA Bantamweight Championship with a win over Diego Wilson before signing with Score Fighting Series.

Hill has since beaten 3 of Canada’s top Bantamweights while fighting under the Score Fighting Series banner. He also defeated Dream veteran Kiko Lopez in another regional event. He has yet to fight in 2013 due to suffering an injury leading up to his scheduled fight with WEC veteran Rafael Rebello in November of 2012.

Hill trains at Iron Tiger Muay Thai, which is in close vicinity to his Ontario, Canada home. His camp does not seem to have any notable contacts to the UFC or Bellator, though it does house fellow prospects Adrian Wooley. Prior to Iron Tiger Muay Thai he was training at House of Champions.

Hill is one of Canada’s top prospects and it usually does not take long for UFC matchmaker Joe Silva to discover and sign them. Hill could be a strong candidate to appear on the upcoming addition of The Ultimate Fighter, which is rumored to be targeting a Canada vs. Australia battle, though TUF 18 will also be hosting Bantamweights. The prospects are high that if Hill tries out for either of those seasons, he is likely a sure bet to make it into the house.

Hill’s skill set is UFC caliber at this point. He has a well-rounded overall game, with solid wrestling, striking, and submissions. His finishing rate has gone down recently, but it’s because he’s been facing stiffer competition. Canada has been looking for a lower weight fighter to support ever since Mark Hominick’s retirement. Josh Hill looks to be the type of fighter that can have a solid run in the UFC’s bantamweight division and it would be wise of the UFC to sign him while they still can to compete in their next Canadian show. 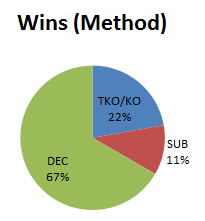