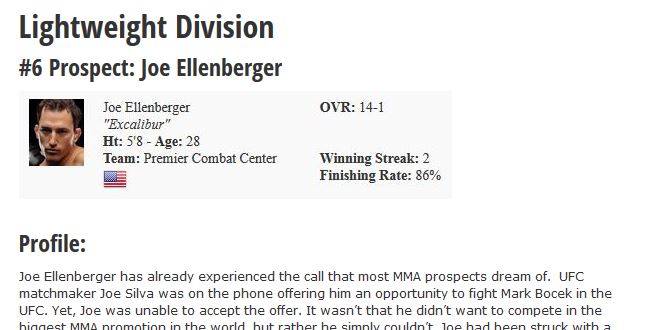 Joe Ellenberger has already experienced the call that most MMA prospects dream of.  UFC matchmaker Joe Silva was on the phone offering him an opportunity to fight Mark Bocek in the UFC. Yet, Joe was unable to accept the offer. It wasn’t that he didn’t want to compete in the biggest MMA promotion in the world, but rather he simply couldn’t. Joe had been struck with a rare blood disorder called, “Paroxysmal Nocturnal Hemoglobinuria.”

Joe Ellenberger didn’t always have to deal with a life-threatening disease. He, along with his twin brother and current UFC title contender, Jake, grew up in Nebraska competing in a variety of sports. Joe focused on wrestling where he took all-state honors in high school before moving on to wrestle at the Division II level in college, twice earning All-American status. Joe and Jake made their MMA debuts on the same night back in 2005 with both winning via 1st round TKO. The buzz started to grow around the Midwest about the twin Ellenberger brothers, who each raced out to 12-0 undefeated records. Jake would move on to fight in bigger promotions and face stiffer competition while Joe took a steadier approach.

By 2009, Jake and Joe were on the radar of the UFC. Joe was 10-0 at the time, 9 of those wins coming via 1st round finish. Then it all started to slowly unravel. Joe had been diagnosed with his disorder leading up to his fight with Joe Wilk. Shortly thereafter, his brother Jake was called up to the UFC and instead of Joe joining him there, he was forced to fight a much more important battle to save his life. His disease was not only supposed to make it impossible to resume his MMA career, but nearly half of all carriers end up forming a blood clot, which could lead to death. Joe thankfully found a treatment program that got him back to a somewhat normal sense of health. As Joe regained his strength, he started to feel the urge to return to MMA and resume his dream of one day joining his brother in the UFC.

After a nearly 2 year absence from the sport, Joe was given medical clearance to step back into the cage. Joe defeated journeyman Jeff Carstens via 1st round submission to signal he was ready for bigger and better things. He quickly moved on to defeat veteran James Warfield and earn a title shot against the emerging Justin Salas in Victory Fighting Championships. Ellenberger and Salas faced off for 5 rounds, but unfortunately for Joe, he came up short for the first time in his professional MMA career. The loss became even more devastating when Salas was called up to the UFC just a few weeks later.

Joe, is currently back on the comeback trail, notching wins over Jesse Zeugin and Joe Wilk. Joe has not fought since December of 2012, though he has been regularly seen training at Kings MMA and Reign MMA alongside his brother Jake.

Joe trains out of Premier Combat Center, located around his home base of Nebraska. More recently, the Ellenberger brothers have been training in California at Kings MMA and Reign MMA, which is home to Mark Munoz, Emanuel Newton, and a variety of high-level training partners. Joe should have all the connections in the world to the UFC or Bellator.

So, what is holding Joe Ellenberger back from joining his twin brother Jake in the UFC? At this point, it’s a bit of a mystery. Joe has not competed in over 6 months and there hasn’t been any recent news about any possible medical setbacks, injuries, or promotional disputes. Joe has to be on the short list of prospective free agents that Joe Silva is looking at. His loss against Salas delayed his likely debut, but now the time seems ideal for Joe to enter the UFC Lightweight ranks.

With a stellar 14-1 record, 13 of those wins coming via finish, Joe has the resume, story, bloodlines, and skills to be fighting on the big stage. Joe has not faced the stiffest competition in the world, but he has beaten some solid veterans, including Warfield and Wilk.

Regarding Joe’s future potential in the UFC Lightweight Division, expectations are tempered. His loss to Salas, showed some of the limitations Joe may have due to circumstances beyond his control. He struggled mightily with his conditioning in the latter rounds of the Salas fight and it’s well known that tiredness and shortness of breath are symptoms of his condition.

Joe is a very different fighter from his brother. While Jake is a juggernaut, Joe is a bit more calculated. He likes to shoot double leg takedowns and seems a bit more comfortable with playing to his wrestling strengths. In addition, his striking still seems a bit limited compared to his brother’s highlight-reel knockout victories. Joe does have decent power in his hands, and strangely has a longer right arm than left (1″ difference).

Joe’s future success against elite-level competition will ultimately come down to his conditioning issues. The level of conditioning and athleticism required to compete in the UFC’s Lightweight Division has grown immeasurably over the last few years. Joe still has the skills to not only win in the UFC, but become a legitimate Top 25-35 fighter. The question is whether his health will allow it. If Joe can be more than a 1-round fighter, he is as dangerous as any lightweight currently fighting outside of the UFC.

The hope is that the UFC will take notice of everything that Joe has fought for in his life to get to the point he is at right now. Doctors said he was done, but Joe kept fighting the fight. He now has one goal left to accomplish and he seems to be on the brink of making that come true. The Ellenberger brothers started their careers on the very same night and it would be some type of storybook ending, if they were able to do so once again, at the pinnacle of the sport. 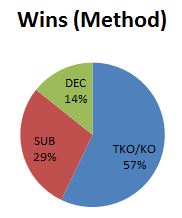