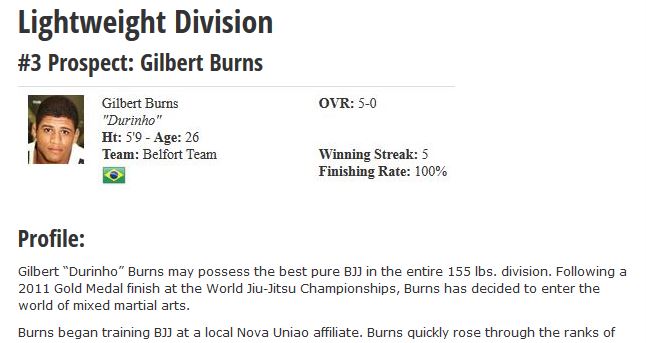 Gilbert “Durinho” Burns may possess the best pure BJJ in the entire Lightweight division, and it’s only a matter of time before he backs up that statement by signing with the UFC or Bellator.

Burns began training BJJ at a local Nova Uniao affiliate under the tutelage of Ramon Lemos. Burns quickly rose through the ranks of the BJJ tournament circuit, capturing 2nd place at the 2010 BJJ World Championships before eventually winning Gold in 2011. Burns soon struck up a friendship with UFC legend Vitor Belfort and began helping him not only train for his fights, but was selected to help coach Belfort’s team on the inaugural season of TUF Brazil. Burns soon decided to leave the BJJ circuit behind and follow Belfort’s path towards reaching MMA success.

Burns won his lone amateur bout in 2011 before moving on to the pro ranks a few months later. Burns quickly showed off his BJJ prowess as he submitted his first 3 opponents via 1st round submission. Burns’ wins were especially impressive because he absolutely dominated each second of his fights against fairly seasoned veterans Jose Salgado and Vinicius Bohrer. Burns soon found it very hard to find opponents after his quick accumulation of wins. He has since racked up 2 more victories, both 1st round finishes, though he has only fought once in 2013.

Burns now trains alongside Belfort at the Jaco Hybrid Training Center, otherwise known as the Blackzilians. His alliance with Belfort and the Blackzilians should only help his chances with eventually signing with the UFC or possibly World Series of Fighting. Burns’ striking is still his weak area, but working alongside the likes of Belfort, Henri Hooft, and Tyrone Spong should provide him with an ideal training environment to make the needed improvements to his overall game.

It has recently become very difficult to project a world class grappler’s success in MMA. We have seen fighters like Demian Maia and Ronaldo “Jacare” Souza make their mark in MMA, but there have been far more world class grapplers that have come up a bit short. The same conditions usually apply to why a high level Black Belt struggles in MMA, such as a lack of striking, poor conditioning, or the inability to score takedowns against high-level wrestlers. In Gilbert Burn’s case, I believe we have another fighter in the mold of Maia and “Jacare.”

Burns’ grappling is simply on another level compared to most Jiu-Jitsu Black Belts. He is extremely adept at taking his opponent’s back and once he gets the fight to the ground, it’s pretty much over. Burns used to grapple in the 167 lbs. division, so now that he is competing at 155 lbs. in MMA, he seems like an absolute beast in the strength department. Burns is very stocky, but unlike Rousimar Palhares, he is still tall (5’9) enough to reach his opponents with strikes or shoot in for takedowns.

Burns is never going to be a world beater with his striking, but he doesn’t need to be either. He simply needs to have enough striking to set up his takedowns. I haven’t really seen him take a punch that tested his chin, but my hope is that his training partners at Blackzilians will have him well prepared for the bumps and bruises required to make it to the elite level.

It is extremely rare for any world class BJJ fighter to reach a championship level. Many of the highest-level BJJ guys start too late in the game to ever fully round out their skills. Maia and “Jacare” have gotten very close in their careers, but they each have come up a bit short despite their improved striking games. Burns entered MMA at age 26, which is the exact same age frame that Maia and “Jacare” each made their respective full-time transitions to MMA.

The UFC’s Lightweight division is stocked full of high-level wrestlers and grapplers, yet pound-for-pound, I don’t think any of them could beat “Durinho” in a straight BJJ match. Yet, this is MMA we are talking about, so I still see Burns falling short to the elite guys in the UFC who likely have better conditioning, wrestling, and striking at this point in time. I am not trying to sell Burns short though. We have seen a grapplers like Mark Bocek and George Sotiropoulos find decent success in the UFC’s Lightweight Division with a fairly similar grappling-centric skill set like Burns.

I don’t think Burns is quite ready to face elite level competition, but I certainly feel he has the capability to eventually be a Top 20 fighter in the UFC. 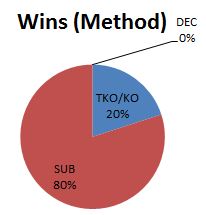