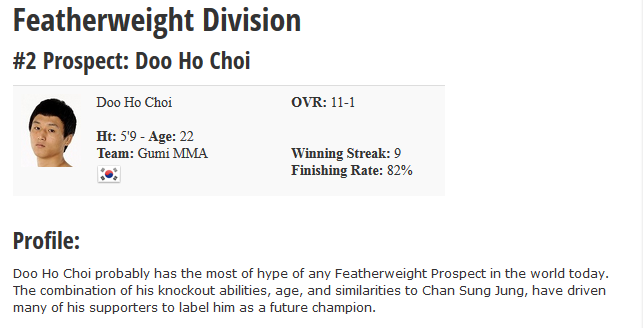 Doo Ho Choi probably has the most of hype of any Featherweight Prospect in the world today. The combination of his knockout abilities, age, and similarities to Chan Sung Jung, have driven many of his supporters to label him as a future champion.

Choi, hailing from Gumi, South Korea, began his MMA career in 2009 at just 18 years old. He submitted his first opponent before moving on to compete in the M-1 promotion, where he won via TKO finish. Choi signed with Japan’s DEEP promotion in 2010, where he lost his only career fight via split decision to Yusuke Kagiyama. Choi rebounded with back-to-back wins later that same month and has since extended his win streak to 9.

Choi’s rise through the ranks truly began with his 2011 fight against former DEEP Lightweight Champion Nobuhiro Obiya. Choi was still thought to be a developing prospect and came in as the slight underdog, but he quickly showed why he was a fighter to watch, knocking Obiya out cold with a flying knee. Less than 2 months later, Choi looked to capitalize on his recent hype by facing off with PRIDE and Strikeforce veteran Mitsuhiro Ishida. Surprisingly, Choi missed weight citing a back injury during training. Regardless, It was a huge step up in competition, but Choi showed absolutely no fear, stuffing Ishida’s takedown attempts and finishing him with strikes in the 1st round.

Choi’s win over Ishida brought him a new wave of fans from all over the MMA world, but some bizarre events began to transpire leading up to his scheduled bout with Kazunori Yokota. He was supposedly reported missing, a week before his fight. Yokota was given a new opponent, and the whole debacle seemed to possibly stem from some type of disagreement between Choi and the promoter. 6 months later, Choi finally made his return, knocking out Kosuke Umeda. His next fight was cancelled due to being involved in a car accident just a few weeks before his fight with Shoji Maruyama at DEEP 60. Questions began to arise whether Choi was just suffering from a case of bad misfortune or possibly some issues regarding his maturity. In a matter of 1 year, Choi had 2 fights cancelled due to unusual events and had missed weight for his Ishida fight.

Thankfully, Choi has been able to put some of that drama behind him as he’s won back-to-back fights in 2013, which has prompted rumors that he is on the verge of signing with the UFC.

Doo Ho Choi primarily trains out of Gumi MMA, which has yet to produce any notable names. Choi has at times ventured over to CMA Korea and more recently Team Posse, which is home to some better known fighters. Choi has recently been helping  UFC title contender Chan Sung Jung prepare for his fight with Jose Aldo. Choi’s talents have not only caught the eye of his new training partners, but all of Asian MMA, as he is widely regarded as their #1 prospect. Korean Top Team, Team Posse, and Busan Team M.A.D are the most notable gyms in South Korea. One has to wonder if he will eventually make a permanent move to one of these bigger camps where he can further his overall skills.

Doo Ho Choi claimed the UFC had contacted him in early 2012 and told him that he was likely 1 fight away from a contract. That didn’t end up happening, but the rumor was brought up again during the commentary of his recent win over Shoji Maruyama as broadcaster/fighter Satoru Kitaoka claimed Choi would sign with the UFC after this fight. Choi likely has heard from UFC officials and I have no reason to doubt that he is on the verge of signing with them, it’s just a matter of when. The UFC may be saving Choi’s signing for when they come back to Asia.

Choi has had some recent quotes possibly taken out of context, such as him being ready to fight UFC Featherweight Champion Jose Aldo, that he would smash UFC Featherweight Nam Phan, or that he is unbeatable. Choi is only 22 years old and he will have his fair share of naysayers similar to recent Irish import Conor McGregor. He seems to be biting at the bit for an opportunity to fight in the UFC, and I hope he has a strong management team to keep him grounded for the time being. There are big concerns about him consistently making weight and Choi cannot overestimate his value and think that he can miss weight and get away with it in the UFC. He has recently shown he can hit 145 lbs., but it seems that every one of his coaches are worried about that issue leading up to his fights.

If fans want a comparison, they have to look no further than Chan Sung Jung. Choi is quick, with a great chin and can hurt you with punches or knees. His takedown defense is stellar as are his transitions on the ground. Choi is very strong, despite looking a bit wiry. I do expect him to suffer some losses along the way towards one day being a title contender. His penchant for exchanging rapid haymakers will likely lead to him being caught sooner or later. It will all be about how Choi is able to handle those first few losses and whether he is willing to change, just as Chan Sung Jung did after his early WEC losses. Ultimately, Choi’s hype is for real. He is an outstanding prospect that is just starting to come into his own. 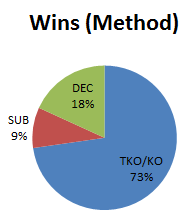