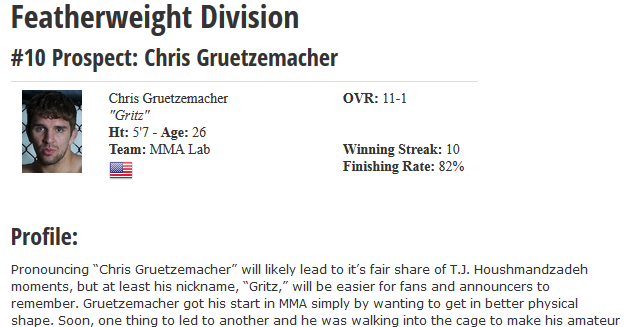 Pronouncing “Chris Gruetzemacher” will likely lead to it’s fair share of T.J. Houshmandzadeh moments, but at least his nickname, “Gritz,” will be easier for fans and announcers to remember. Gruetzemacher got his start in MMA simply by wanting to get in better physical shape. Soon, one thing to led to another and he was walking into the cage to make his amateur debut in 2008.

His amateur career did not last long as he turned pro a few months later. Following a debut win, he suffered his first career loss to Lightweight Joe Cronin. Gruetzemacher rebounded by winning his next 4 fights before deciding to drop down to Featherweight. The results were immediate as he finished his next 6 opponents, all via finish. His most recent two wins came against UFC veteran Roli Delgado and WEC vet Frank Gomez.

Gruetzemacher was rumored to have signed with World Series of Fighting (WSOF) in 2012, but his profile was soon removed from their roster. Then a few short months later, he was scheduled to fight fellow Featherweight prospect Jerrod Sanders, but ultimately pulled out of the fight due to injury.

Gruetzemacher trains out of MMA Lab alongside UFC champion Ben Henderson, Efrain Escudero, and Jamie Varner. One would think that “Gritz” would have gotten the call by a bigger promotion by now, but it just hasn’t happened yet. Ben Henderson even gave Gruetzemacher a shout out in his post-fight interview, begging the UFC to sign him and some other teammates. Unfortunately, the appeal to Joe Silva and Sean Shelby did not pan out. The MMA Lab is quickly developing into a marquee camp and has provided Gruetzemacher with an ample amount of high-level training and sparring partners.

Gruetzemacher’s fighting style is not what one would term, “pretty.” His nickname says it all as he’s a gritty in your face type fighter. He is not quite on Nik Lentz’s level, but there are many similarities shared between the two.

Gruetzemacher does not come from a elite-level training background in wrestling, striking, or Jiu-Jitsu. He did wrestle in high school and stated that he was the runner-up at the state level, though it is curious as to why he never moved on to wrestle in college, considering he would have likely received scholarship offers. Nonetheless, “Gritz’s” wrestling background is evident throughout his fights. He is a burly, strong fighter that simply overpowers his opponents in the clinch. He has developed a very good top game, which has led to many of his stoppage victories.

Gruetzemacher is likely not championship level material. He lacks technical skills in his striking and is a bit clunky with his overall movement. We have seen him get into recent trouble in his last couple of fights, but he has luckily been able to muscle his way out of bad positions. He will find that more difficult to do at the UFC level. Gruetzemacher is only 5’7, and though he has found success at 145 lbs., I wonder if he would be best served fighting at Bantamweight, where his wrestling could really be a difference maker. Guys like Lentz and Darren Elkins are much bigger than “Gritz,” so he will have to take a really hard look and see if he can possibly make the drop. Based off what I have seen on video, it looks as if he can possibly shed those remaining pounds.

Should Gruetzemacher remain at Featherweight he will have some stiff challenges ahead. He seems to be aligned with WSOF at this point, and there will definitely be a step up in competition awaiting him. I am not sure how long his contract is for, but should he win his next 2-3 fights, the UFC or Bellator could be waiting to pounce. 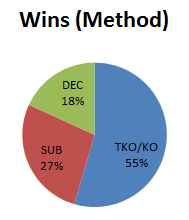