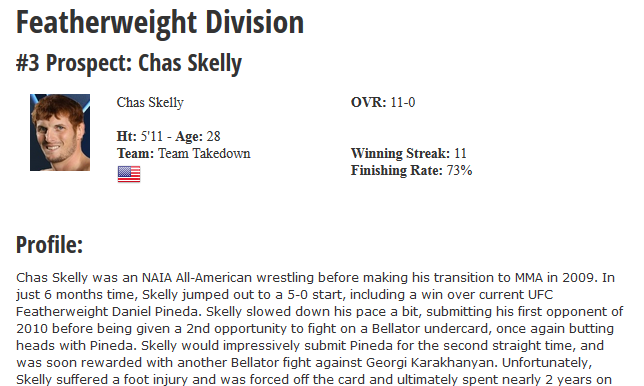 Chas Skelly was an NAIA All-American wrester before making his transition to MMA in 2009. In just 6 months time, Skelly jumped out to a 5-0 start, including a win over current UFC Featherweight Daniel Pineda. Skelly slowed down his feverish fighting pace a bit, collecting one more submission win before being given a second opportunity to fight on a Bellator undercard, once again butting heads with Pineda. Skelly impressively submitted Pineda for the second straight time, and was soon rewarded with another Bellator fight against Georgi Karakhanyan. Unfortunately, Skelly suffered a foot injury and was forced off the card and ultimately spent nearly 2 years on the sidelines.

In 2012, Skelly made his return to the cage, defeating his next 2 opponents to raise his overall record to 9-0. Skelly’s next fight against Strikeforce veteran Nick Gonzalez was cancelled due to Gonzalez missing weight. He eventually returned to defeat journeyman Rey Trujillo at Legacy FC event. 6 months later, Skelly was once again called to appear on a Bellator undercard, where he defeated Jarrod Card via decision.

Skelly trains out of Team Takedown alongside Johny Hendricks, the Rosholt brothers (Jake & Jared), and the recently retired Shane Roller. The gym is heavy on wrestling, which is likely the way Skelly prefers it. Team Takedown has connections to the UFC and many of the regional promotions around the Midwest such as Legacy FC, which Skelly recently competed in.

Chas Skelly’s MMA record speaks for itself, 11-0 overall with 8 finishes, 2 of which came against current UFC Featherweight Daniel Pineda. So, why is Skelly not signed to the UFC or Bellator? It’s simply been a matter of timing and Skelly’s unfortunate luck with injuries.

Skelly was likely on his way to signing an exclusive deal with Bellator prior to his foot injury and the scrapped bout with Georgi Karakhanyan. That injury kept Skelly out for an extended period of time, and upon his return he seems to be just hitting his stride again. Skelly has beaten some tough veterans in his last few fights, but he hasn’t really wowed anyone with the style in which he won those fights.

Skelly has a grinding style of fighting. He uses his size extremely well to frustrate his opponents and eventually starts hunting for the takedown where he can use his submission skills. Skelly’s striking is still a big concern that has yet to be fully addressed. He is not going to be able to crack the Top 10-15 of the UFC if he cannot expand his current skill set. Outside of Hendricks, his camp, Team Takedown, has struggled to diversify their skills over the last few years. The same fate may prove true for Skelly should he start facing elite level competition.

Skelly seems very likely to sign with Bellator in the very near future. He has appeared on 3 Bellator undercards as a regional draw, and has won each of those fights. Bellator is not keen on signing wrestling-based fighters unless they are at an elite level, so that could be reason enough for why Skelly has not been offered a Bellator contract.

The UFC’s Featherweight Division is currently stacked and Skelly will have to start finishing guys in order to make a statement that he belongs on the big stage. I do believe Skelly deserves a shot at proving himself against marquee competition. He would be a solid Top 25-30 type guy in the UFC right now, comparing very similarly to Darren Elkins, who also has good size with a wrestling base. Skelly just needs to keep grinding his way to victories because the one thing that the UFC or Bellator can’t shy away from signing, is an undefeated prospect with a legitimate record against tough competition. If Skelly can win his next 3-4 fights, and raise his record to 15-0,  I expect him to be signed by either the UFC or Bellator. 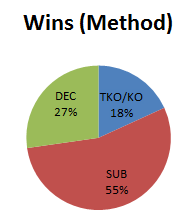