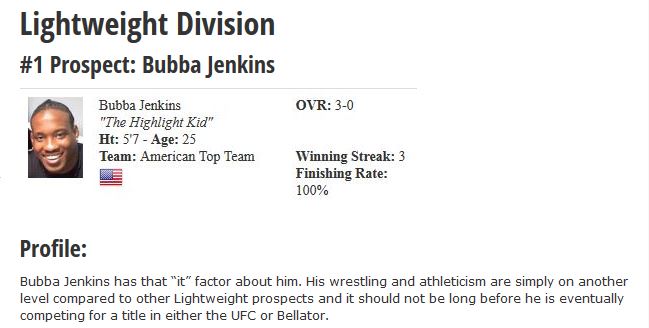 *Bubba Jenkins has been signed by Bellator

Bubba Jenkins has that “it” factor about him. His wrestling and athleticism are simply on another level compared to other Lightweight prospects and it should not be long before he is eventually competing for a title in either the UFC or Bellator.

Jenkins already has one title on his resume that immediately commands respect. Jenkins won the 2011 NCAA wrestling championship (157 lbs.) his Senior year while competing for Arizona State University. Jenkins had previously attended Penn State University where he had reached All-American status before running into some academic troubles. Following his 2011 NCAA Championship run, Jenkins began training at American Top Team in preparation for his MMA debut.

Jenkins debuted in the Tachi Palace Fights (TPF) promotion where he faced fellow newcomer Josh Williams. Jenkins shot in for a takedown immediately, and after avoiding a few submission attempts, was able to earn the 1st round finish via TKO. Jenkins fought once more for TPF, defeating journeyman Chris Gomez by 1st round submission.

Jenkins soon moved on to sign an exclusive 6-fight contract with the prospect-rich promotion, Resurrection Fighting Alliance (RFA). In his RFA debut he faced Jesus Adame. Jenkins wasted little time bringing the fight to the ground and immediately began showing off some improved ground ‘n’ pound to earn the quick stoppage.

Jenkins was set to face Jimmy Spicuzza in his next fight, but he was ultimately forced off the card due to injury. He has yet to compete in 2013, though he was busy coaching Jon Jones’ team on The Ultimate Fighter 17.

Jenkins trains out of American Top Team in Coconut Creek, Florida. ATT head coach Ricardo Liborio has raved about Jenkins’ potential. Liborio has been in the fight game a long time and knows what it takes to be a championship level fighter. Though he admits Jenkins still needs to work on his striking and overall skill level, he truly feels that Jenkins has the tools to one day be a champion. By aligning himself with ATT, Jenkins has enabled himself to receive world class training and test his skills daily in the gym around UFC-quality competition.

Bubba Jenkins is the only Lightweight I felt had true championship potential. When you look at the landscape of MMA today, it is glaringly apparent how much wrestling plays an integral role in a fighter becoming a champion. Cain Velasquez, Jon Jones, Chris Weidman, Georges St.Pierre, Ben Henderson, and Demetrious Johnson are all wearing championship gold around their waists because of their wrestling backgrounds. Each of these champions have arguably added to their skill sets over the years, and that will ultimately be the deciding factor in whether Bubba Jenkins reaches the great heights some have him pegged for.

Jenkins’ finishing skills are still limited, but with each fight you can see him gaining more confidence. He has yet to truly face an even mediocre-level fighter, so there is concern there, but I can see no reason why his takedowns would somehow become ineffective against even the most skilled competitors.

Could Jenkins sign with the UFC today and become an instant Top 10 fighter? At this point in time, I’m not so sure. Don’t get me wrong, Jenkins can win fights in the UFC right now. Just look at a guy like Jacob Volkmann, who went 6-2 in the UFC’s Lightweight division by pretty much relying solely on his wrestling. The issue with the Volkmann comparison is that both Jenkins and his ATT coaches don’t want him to be just known as a lay ‘n’ pray wrestler. Jenkins is capable of so much more due to his explosiveness and speed and it’s telling that he signed a 6-fight contract with RFA because that’s likely how long Jenkins is going to take to finally put all the pieces together to make him him a dangerous well-rounded fighter that is ultimately able to compete with the best in the division.

Jenkins is scary-gifted when it comes to his raw athleticism and speed. You simply can’t teach those types of things. There’s a reason NFL general managers salivate year after year at the NFL Draft combine watching the newest incoming class of genetic freaks. Sometimes their picks are hit and miss, but when they do hit on a talent, one who has that rare athleticism, that if paired with the right amount of coaching and the necessary will to succeed, there is no stopping that player’s future star potential. Jenkins is that 1st overall pick type of talent. If he can put it all together, we might be looking at a future UFC champion. 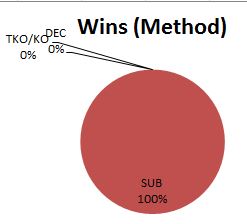