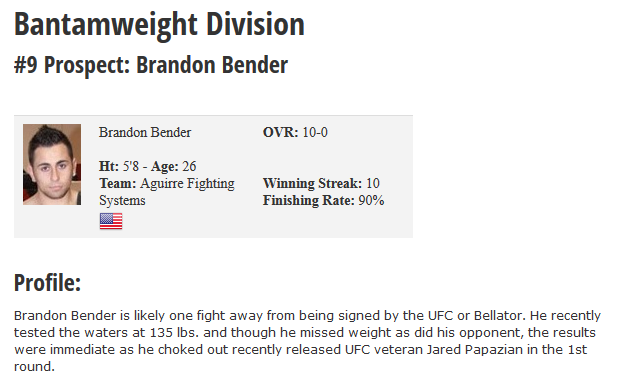 Brandon Bender is likely 1-2 more fights away from being signed by the UFC or Bellator. He recently tested the waters at 135 lbs. and though he barely missed weight as did his opponent, the results were overwhelmingly positive as he choked out recently released UFC veteran Jared Papazian in the 1st round.

Bender began his MMA career in 2006 under the King of the Cage banner. Bender won his debut and followed that up with a submission win 1 year later. He would put his career on hold to nearly join the Navy, but ended up returning to MMA in 2009. Bender won his next 3 fights all via rear-naked choke, including a win over TUF 14 hopeful Jesse Newell.

Bender stretched his winning streak to 7 before earning a fight on the undercard of Bellator 35. Bender once again flashed his submission talents, submitting his opponent in the very 1st round, but Bellator passed on signing Bender to an exclusive contract.

Bender was sidelined for most of 2011 and struggled to find fights in 2012 as two of his scheduled fights were cancelled. Bender was still able to fight twice in 2012 against lesser competition, defeating both opponents via submission. After having his fight at Tachi Palace Fights 14 scrapped, he finally stepped back into the cage on short notice in his Bantamweight debut, facing off against recently released UFC veteran Jared Papazian. Bender made it look easy as he tapped out Papazian in the very 1st round.

Bender originally trained at Aguirre Fighting Systems before moving on to Millennia MMA. Bender frequently trains out of the UFC gym in Los Angeles, CA. Millennia MMA has some connections with the UFC and Bellator. Lorenz Larkin and Darrell Montague are probably their most notable fighters. Millennia MMA is heavy on strikers, which is just what Bender needs to reach his full potential.

Bender has been a bit of a nomad when it comes to finding an MMA promotion to settle down in. He nearly competed in more recognizable promotions such as Tachi Palace Fights and Resurrection Fighting Alliance in 2012, but both of those fights ended up being scrapped.

Bender finally got the opportunity to test his skills against a UFC veteran, Jared Papazian, and the results were about as good as possible. Now, it’s going to be about Bender staying ready for a possible call from the UFC or Bellator. He had trouble making weight for his fight with Papazian, although it was on short notice. Bender’s striking is still not as advanced as it probably needs to be, but his training partners at Millennia MMA are probably helping improve on a daily basis.

Bender’s cardio and striking are still question marks as far as projecting his long-term ability against elite level competition. Bender leaves a bit to be desired regarding his athleticism, but he is an extremely cerebral and technical fighter on the ground. I am just not sure if he is ready to tackle the Top 20 of the division at this point, but I could see him being on the level of Dustin Kimura, who just won his UFC debut. Regardless, the recent win over Papazian is a huge victory and it shouldn’t be long until he’s signed by a major promotion. 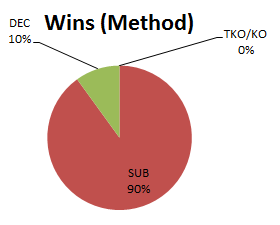