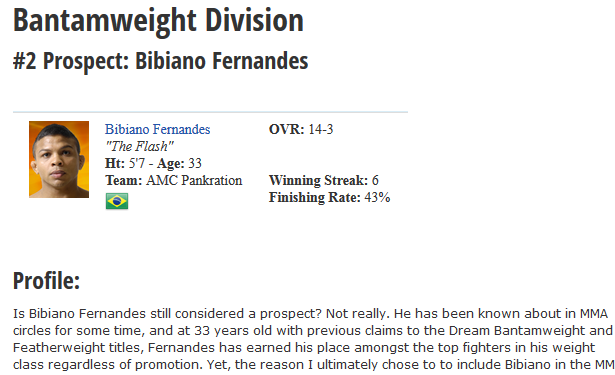 Is Bibiano Fernandes still considered a prospect? Not really. At 33 years old with previous claims to the Dream Bantamweight and Featherweight titles, Fernandes has earned his place amongst the top fighters in his weight class regardless of promotion. Yet, the reason I ultimately chose to to include Bibiano in the MMA Prospects Report is because he hits all the parameters for qualification. He has never fought in the UFC, PRIDE, Bellator, or Strikeforce. Beyond the MMA diehards, nobody really knows just how good Bibiano is. So, going to back to the original goal of the MMA Prospects Report, which was to bring more attention to talented fighters outside of the major promotions, Bibiano’s inclusion was a must.

Fernandes grew up in Manaus, Brazil, and had what one would term a tough upbringing. He lived in the jungle for a time, and cleaned the mats of his BJJ gym just to train. Luckily, that BJJ gym provided him the training and sanctuary needed to change his life’s path. Fernandes eventually moved on to win Gold Medals in the Black Belt Division for the Pan American JJ tournament (2004-2006) and World JJ tournament (2003, 2005-2006). Having dominated the BJJ scene in his weight class, Bibiano was ready to tackle a new challenge, MMA.

Bibiano stepped right into the deep end of the sport, challenging future WEC champion Urijah Faber in the King of the Cage promotion for their Bantamweight (145 lbs.) Championship. Bibiano nearly submitted Urijah in the opening minutes of their fight, but Urijah turned the tide and earned the stoppage due to some big elbows that cut Bibiano open. After nearly a year away from the cage, Bibiano brought his talents to Japan, competing against their prized star, Kid Yamamoto. Bibiano went on to lose via unanimous decision, dropping his overall MMA record to just 1-2.

Having faced arguably the top 2 guys in the 145 lbs. division, Bibiano took a step down in competition, and quickly started to pile up victories. After back-to-back wins in Canada, Bibiano entered the Dream 2009 Featherweight (139 lbs.) Grand Prix. Bibiano defeated Japanese veterans Takafumi Otsuka and Masakazu Imanari to reach the semifinals of the tournament. In the semis, Bibiano quickly submitted future Bellator champion Joe Warren enabling him to move on to the finals where he would face Hiroyuki Takaya later on that same night. In a close fight, Bibiano was able to sneak out a victory and become the first ever Dream Featherweight Champion.

Bibiano went on to successfully defend his title against Joachim Hansen before once again facing off with Hiroyuki Takaya. Takaya would get his revenge, winning a unanimous decision and the Dream Featherweight title. Bibiano would chase down a Dream Championship once again, as Dream soon announced their 2011 Bantamweight (135 lbs.) Grand Prix. Bibiano was the odds on favorite to win, and that he did, outlasting Takafumi Otsuka, Rodolfo Marques, and Antonio Banuelos to win the Dream Bantamweight Championship.

Unfortunately, Dream was struggling to stay afloat and Bibiano was forced back to the free agent market. After nearly signing with the UFC in 2012, Bibiano ended up signing with One FC where he quickly won their Interim Bantamweight Championship.

Bibiano now calls Vancouver, Canada his home. He primarily trains under Matt Hume at AMC Pankration alongside Demetrious Johnson and Tim Boetsch. Fernandes has shown some stellar growth in his striking over the years and is one of the most well-rounded fighters in the Bantamweight Division. Fernandes’ coach, Matt Hume, currently holds an executive position with One FC, so we can likely expect Bibiano to stay with their promotion for as long as they are willing to pay him top dollar.

It looks as if Bibiano is content to finish his career fighting in obscurity. He has stated in interviews that he fights in front of full stadiums and is treated with such great respect by One FC’s fans, but he has to know that means little in the eyes of most others that regard Bibiano as being afraid to sign with the UFC. Bibiano has always made money his primary concern in MMA. Had the UFC offered him more dollars upfront, Bibiano would likely be challenging for the UFC Bantamweight title right now. Unfortunately, Bibiano could not allow himself to gamble with the possibility of losing in the UFC, which would have made his demand in Asia much less.

It seems as if Bibiano is happy, fighting lesser competition and collecting paychecks in the process. He has made it clear he does not fight to prove anything to anyone. Unfortunately, stateside fans will likely never get to experience Bibiano’s skills against comparable competition. 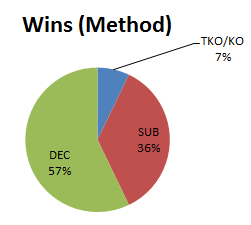