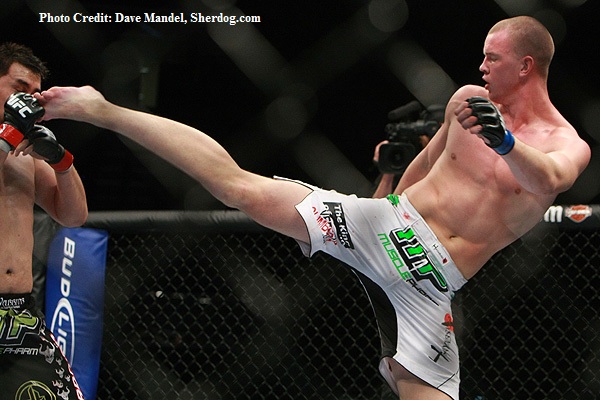 Background:
Stefan Struve has proven to be one of the most exciting heavyweights on the UFC roster as 26 of his 27 fights have ended via finish. Struve, standing 6’11, made his mixed martial arts debut in 2005. Struve built a 16-2 overall record on the independent circuit, highlighted by wins over Tom Blackledge, Colin Robinson, and Mario Neto. Struve signed with the UFC in 2009, making his debut against Junior Dos Santos at UFC 95. Struve did not fare well as Dos Santos quickly finished him via 1st round TKO. Struve bounced back winning a bloody battle over Denis Stojnic before picking up victories over Chase Gormley and Paul Buentello. Struve stepped up in competition to face Roy Nelson, but once again stumbled, losing in the first minute of the fight via TKO. Struve moved on to finish Christian Morecraft and Sean McCorkle via strikes before falling to fellow prospect Travis Browne via brutal knockout. Struve would square off with Pat Barry in his next fight, winning via submission in the 2nd round.

2011 Breakdown:
Struve fought 2 times in 2011, going 1-1 overall.
Struve faced fellow rising prospect Travis Browne at UFC 130 in a battle of two of the UFC’s tallest fighters. Both men came out looking for big strikes early. Browne was the initiator while Struve looked to counter. Browne briefly secured the takedown, but quickly decided to stand up knowing Struve’s submission skills. Struve nearly caught Browne in a triangle before Browne finally backed away completely. Struve got back to his feet and as he came forward, Browne dropped him with a big right hand. Browne threw a couple of unnecessary punches before the referee stepped in and stopped the fight.
Struve looked to rebound against striker Pat Barry at UFC on Versus 6. The fight started off slowly as Barry patiently tried to close the distance. Struve began throwing out strikes to keep Barry at bay, but Barry continued to push forward. Both fighters began to throw out big strikes, but most missed their target. It was fairly even going into the 2nd round. Barry pushed forward once again, landing a solid punch. They traded leg kicks until Struve grabbed hold of the Thai clinch. Barry quickly broke away and landed a solid left hand. Struve locked on a guillotine before transitioning to a triangle. Barry tried to slam his way out, but Struve held on to the hold and forced Barry to tap out.

2012 Forecast:
Stefan Struve is the youngest UFC heavyweight in the division. Despite having 18 fights on the European independent circuit, Struve is still growing as a future prospect. Struve’s ability to compete with the significant step up in competition has been impressive though he has fallen short against the top contenders of the division. Struve always comes to fight, win or lose, and has not backed down from some of the UFC’s heaviest hitters (Dos Santos, Nelson, Barry). Unfortunately, Struve’s bravery has led to some knockout losses. Although Struve is young, he has been dealt some heavy blows thus far in his career. Hopefully the UFC is keeping close track of this and starts booking Struve against other ground-specialists, rather than just strikers. Struve is still filling out his frame and has struggled to take advantage of his long reach when striking. Struve could turn out to be front-line UFC heavyweight in a few years if he can mold his striking game after former UFC heavyweight Semmy Schilt.