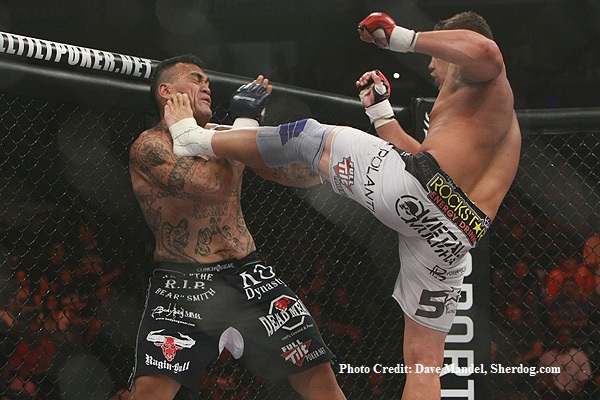 Background:
Shane Del Rosario is an undefeated rising prospect in the UFC heavyweight division. Following a successful background in Muay Thai, Del Rosario made his mixed martial arts debut in 2006. Del Rosario won his first 2 fights before signing with EliteXC in 2007. Del Rosario went 3-0 in the promotion, including a TKO finish of Carl Seumanutafa. Del Rosario moved on to the M-1 promotion, once again going 3-0, highlighted by a TKO victory over Maxim Grishin. Del Rosario ended his tenure with M-1 and signed with Strikeforce in 2009. Del Rosario made a successful debut against Brandon Cash, winning via submission after being rocked by some big punches. Del Rosario continued to move up in competition, defeating Lolohea Mahe via 1st round TKO. Del Rosario would take part in Strikeforce’s heavyweight Grand Prix tournament as an alternate, winning his first fight via submission over Lavar Johnson. Del Rosario’s career would take a big hit though as he was injured in a car accident, forcing him out of the heavyweight grand prix and the remainder of 2011. It was later announced that Del Rosario would be moving to the UFC following its purchase of Strikeforce. It is expected that Del Rosario will make his debut sometime in 2012.

2011 Breakdown:
Del Rosario only fought once in 2011 due to injuries.
Del Rosario took part in the Strikeforce heavyweight grand prix tournament as an alternate.
In the first round of the tournament he faced off against striker Lavar Johnson. Both fighters traded early, but it was Johnson that surprisingly went in for the takedown. Both fighters returned to their feet where Del Rosario found success with his kicking game. Del Rosario landed a nice combination before taking Lavar down and immediately mounting him. Following some ground ‘n’ pound, Del Rosario locked on an armbar for the 1st round submission victory.
Del Rosario was set to square off against fellow undefeated prospect and alternate Daniel Cormier in the second round of reserve bouts, but Del Rosario was injured in a car crash.
Del Rosario would be sidelined for the remainder of 2011 due to those injuries.
Del Rosario signed with the UFC in late 2011 as part of the mass exodus of Strikeforce heavyweights to the UFC.

2012 Forecast:
Shane Del Rosario is one of the rising stars in the heavyweight division. Del Rosario has showcased a strong blend of striking and submission skills. Early on his career, Del Rosario was finishing most of his opponents with his Muay Thai skills. Del Rosario has been rocked in a few of his fights, most notably in his Strikeforce debut against Brandon Cash. Del Rosario is able to stay calm in the face of danger, and has been able to fall back on his submission skills to get him out of trouble. Del Rosario has not faced top-level competition, though he did finish Lavar Johnson in his last fight. If Del Rosario can continue to develop his skills and fully recover from his injuries, he should be a future contender in the UFC.