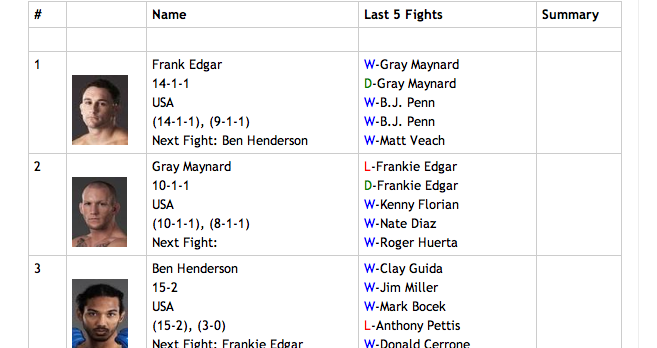 Home of the best MMA rankings on the Net

Our rankings are now featured on Bloody Elbow

I would just like to announce that our MMA world rankings (Top 25) are now featured on www.bloodyelbow.com. We are one of nine contributors to their 2012 December Meta-Rankings. After our rankings were posted along with the other sources, I realized that changes need to be made to the way I compile the Top 25 world rankings.

First off, I will no longer rank a fighter that has moved weight classes and has not yet competed in their new weight class (Frankie Edgar, Clay Guida, Chael Sonnen, etc.). Also, fighters that are serving suspensions due to a failing a test for illegal substances (Alistair Overeem, Nick Diaz, Rafael Cavalcante, etc.). Finally, fighters that have not competed within 18 months will be removed from the rankings (Shane Carwin, Patricio Freire).

I try to bring readers the most accurate MMA rankings and I believe these small changes will help us reach that goal.