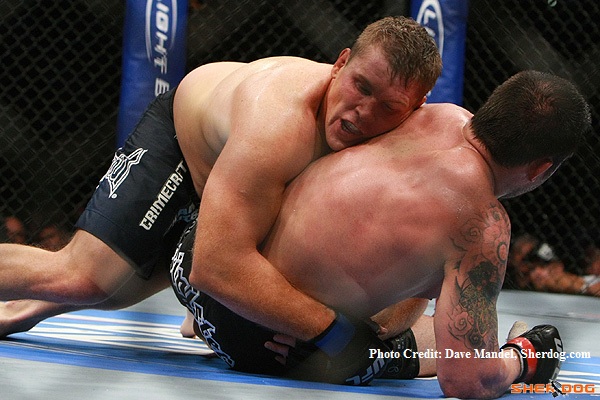 Background:
Mike Russow continues to win fights and is now inching closer to contender status in the UFC heavyweight division. Russow wrestled collegiately before making his way to mixed martial arts. Russow fought once in 1998 before eventually returning in 2006 where he won his next 3 fights to earn a spot in PRIDE. Russow faced Russian striker Sergei Kharitonov in his debut at PRIDE 33, and despite holding his own early, eventually lost via submission in the 1st round. Russow would not fight for PRIDE again as he returned to the independent circuit. Russow strung together 7 straight wins, including a victory over Roman Zentsov before signing with the UFC in 2009. Russow made his debut against Justin McCully, winning via unanimous decision. Russow would move on to face rising prospect Todd Duffee at UFC 114. Duffee battered Russow for most of the fights with huge punches, but in the 3rd round Russow struck back, knocking Duffee out cold with a big right hand. The win was deemed one of the greatest comeback wins in UFC history. Russow remained on the sidelines for nearly 10 months before finally making his return against teammate Jon Madsen. The fight was marred by boos as both men seemed content to fight from the clinch. In the 2nd round, Madsen’s eye began to swell up and the fight was eventually stopped following the round. Although Russow was likely ahead on the scorecards the win did not help him him earn any new fans. Nonetheless, Russow is now 3-0 in the UFC heading into 2012.

2011 Breakdown:
Russow only fought once in 2011, extending his winning streak to 10 overall. Russow faced TUF 10 alum Jon Madsen at UFC Fight Night 24. In a battle of two of the most unlikely undefeated fighters in the UFC, Russow pushed the pace early. Russow scored a couple of solid right hands, but otherwise there was not much offense to score in the 1st round. In round 2, they traded a few punches before moving into the clinch. Russow worked for the takedown, but Madsen was able to stay on his feet momentarily before Russow muscled him to the floor. Russow looked for the guillotine, but the referee questionably stood the fighters back up. They moved back to the clinch before Russow landed another takedown to close the round. In between rounds, Madsen’s left eye looked to be completely closed and the doctors called off the fight, resulting in a TKO victory for Russow.
Russow was initially scheduled to face Dave Herman at UFC 136, but Herman was forced off the card and Russow was shelved for the remainder of 2011.

2012 Forecast:
Mike Russow continues to rack up wins in the UFC despite his lack of athleticism. Russow can absorb a ton of punishment and continue to push forward. Russow has thus far been given some favorable match-ups, minus Todd Duffee, where his lack of speed has not cost him. Russow will likely struggle against quicker, more explosive athletes, but time will tell if he can dictate the pace of a fight as he did with Duffee when facing tougher competition. Russow has always been a part-time mixed martial artist, so his ability to fight at the UFC level should be respected and applauded. Russow has solid wrestling and boxing, but will not blow you away with any particular skill. He is simply tough, and in the heavyweight division that goes a long way when dealing with heavy-handed hitters. Russow rarely fights more than once a year, but will hopefully be given a legitimate contender to see how his skills match up against the elites of the division.