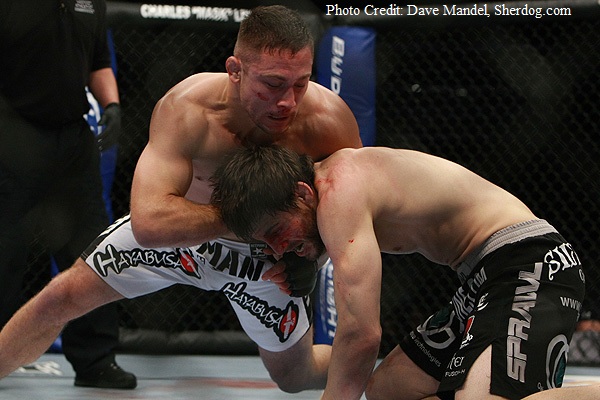 Background:
Mike Pierce is a gritty wrestler who has held his own against many of the top fighters in the UFC welterweight division. Pierce wrestled collegiately at Portland State University before making his way to mixed martial arts in 2007. Pierce struggled out of the gates going 3-2 overall, though his decision losses came to ultra-tough opponents Mark Munoz and Nathan Coy. Pierce bounced back by winning his next 5 fights before signing with the UFC in 2009. Pierce made a successful debut by out-wrestling Brock Larson to a unanimous decision victory in a fight that was continually booed by fans. Pierce was then thrust into a fight with former top contender Jon Fitch. Despite Pierce being a huge underdog, he battled Fitch for 3 rounds and nearly pulled off the finish in the final frame, but ended up losing via unanimous decision. Pierce moved on to compile a solid 3-fight winning streak, defeating Julio Paulino, Amilcar Alves, and Kenny Robertson. Pierce’s win streak came to an end as he lost a tough split decision to Johny Hendricks. Bradley fought once more in 2011, defeating Paul Bradley via decision.

2011 Breakdown:
Pierce fought 3 times in 2011, going 2-1 overall.
Pierce agreed to face newcomer and fellow wrestler Kenny Robertson at UFC 126. Pierce slightly controlled the early action by pushing the pace and landing a couple of takedowns. Pierce was able to score an impressive TKO victory in the 2nd round by dropping Robertson with a big left hand.
Pierce moved on to face Johny Hendricks at UFC 133 in a battle of rising UFC welterweight prospects. The winner was likely set to face a marquee name, so the stakes were high. Pierce and Hendricks battled back-and-forth for 3 rounds with neither fighter gaining a true edge. Hendricks seemed to be the one pushing forward for the first 2 rounds, but it was close as both men landed a fair amount of offense. In the final frame, Pierce was able to score his first takedown, but he could not really do anything with it. The fight ended in a split decision victory for Hendricks.
Pierce moved on to face familiar foe Paul Bradley at UFC on Fox 1. Pierce had beaten Bradley previously in 2009. Pierce started out the fight pushing the pace and landing the better strikes. The fight slowed in the latter rounds as both men looked unwilling to risk losing. It was a close fight, though Pierce did just enough to win a split decision victory.

2012 Forecast:
Pierce’s only 2 UFC losses have been razor-thin decisions to Jon Fitch and Johny Hendricks. That is nothing to be ashamed of. Unfortunately, Pierce’s UFC wins have been primarily against unknown fighters and his fight-style is not the most fan-friendly. No one doubts Pierce’s toughness and willingness to fight anyone, but it is still debatable whether Pierce will ever break through into the upper echelon of the welterweight division. Though Pierce is bulky, he only stands 5’8 and would be wise to consider a move down to lightweight, should he continue to lose to the top-flight guys at 170.