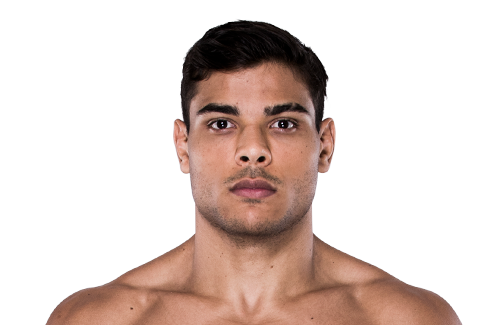 Borrachinha made his professional MMA debut in his native country of Brazil in February 2012. In order to pay for his training, he worked in real estate[4]. Over the next five years, he amassed a record of 8-0 with 7 knockouts and 1 submission.[5]

Costa was chosen to be a fighter on The Ultimate Fighter: Brazil 3. In the opening elimination round, he defeated José Roberto via submission (guillotine choke) in the second round. Costa was the second middleweight fighter chosen by coach Wanderlei Silva. His next fight was against Márcio Alexandre Jr. and Costa lost via split decision after three rounds.

Borrachinha made his promotional debut on March 11, 2017 at UFC Fight Night 106 against Garreth McLellan.[6] He won the fight via TKO in the first round, earning his first Performance of the night, as well as his first win with the promotion.[7]

After the fight with Bamgbose, UFC offered a new contract but the parties wouldn’t come to an agreement with the financial terms. UFC then proposed a fight with former welterweight champion Johny Hendricks with a promise to renegotiate after the bout.[10]

Borrachinha then faced Hendricks on November 4, 2017 at UFC 217.[11] He won the fight via TKO in the second round.[12] After the bout Borrachinha signed a new, multi-fight contract.[10]

Costa was expected to face Uriah Hall on April 21, 2018 at UFC Fight Night 128.[13] However, Costa pulled out of the fight in mid-March with an arm injury.[14] In turn, promotion officials elected to pull Hall from that event entirely and reschedule the pairing for July 7, 2018 at UFC 226.[15] Costa won the fight via technical knockout in round two.[16] The win earned him the Performance of the Night award.[17]

Costa was scheduled to face Yoel Romero on November 3, 2018 at UFC 230.[18] However, Romero indicated in mid-August that while he has been cleared to fight, his doctors have recommended that he wait another four to five months (early 2019) to allow facial injuries incurred during his most recent fight to fully heal.[19] The bout was rescheduled again and was expected to take place on April 27, 2019 at UFC on ESPN 3.[20] However on March 7, the promotion elected to replace Costa for undisclosed reasons and arrange a rematch between Romero and former Strikeforce Middleweight Champion Ronaldo Souza for that event.[21]