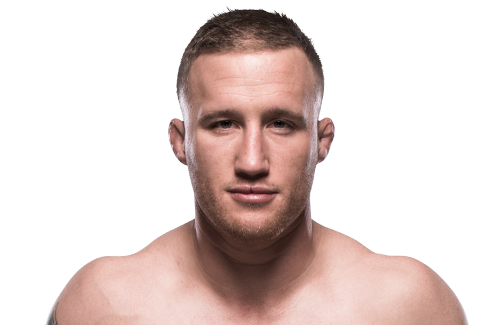 Gaethje was born on November 14, 1988 in Safford, Arizona. His mother, Carolina (née Espinoza), is of Mexican descent; his father, John Ray Gaethje, is of German descent.[6][7] His mother was a postmaster while his father was a copper miner, as were both of his grandfathers. His paternal grandfather boxed while in the Army.[8] He has a twin brother, Marcus John Gaethje, who has worked at the Morenci Mine since he was 18.[7] Outside of MMA, Gaethje once spent a summer working at the Morenci Mine, and holds a bachelor’s degree in Human Services.[9]

Gaethje began wrestling at the age of four,[10] and attended Safford High School,[11] where he was a four-time finalist and two-time Arizona state champion as a wrestler.[12]

Gaethje wrestled for the University of Northern Colorado. As a junior, he placed 7th in the 2010 NCAA Division I 157 lb Championship and became the first (and only, as of 2017) Northern Colorado athlete to attain All-American status since the school joined Division I in 2006.[9][13] He dropped down to the 149 lb division for his senior year, but had struggles with weight cutting.[14] Gaethje also wrestled with a number of mixed martial artists such as Georges St-Pierre during his collegiate years.[15]

Gaethje began his amateur MMA career during his studies at the University of Northern Colorado. He amassed a 7–0 amateur record before making his professional debut on August 20, 2011 against Kevin Croom. Gaethje won the fight in the first round via KO due to a slam after his opponent attempted a submission.[16]

Gaethje was signed by the World Series of Fighting on January 22, 2013, and made his debut at WSOF 2 against Gesias Cavalcante, finishing the fight in the first round through TKO (doctor stoppage) after opening a cut above Cavalcante’s left eye.[17]

At WSOF 3 he fought Brian Cobb, eventually winning via TKO from leg kicks in the third round.[18]

Afterwards, he fought Dan Lauzon at WSOF 6, finishing Lauzon with a right uppercut in the second round.[19]

Gaethje headlined WSOF 8 against Richard Patishnock and became the inaugural WSOF Lightweight Champion after dispatching Patishnock in the first round via TKO.[20]

His first title defense was at WSOF 11 against Nick Newell.[21] Gaethje won the fight with a right hook TKO in the second round.[22]

He then went on to fight Luis Palomino at WSOF 19, Gaethje beat Palomino via TKO in the third round.[25] The LA Times named this fight as the best fight of 2015.[26]

He had a rematch against Luis Palomino at WSOF 23 and defended his belt, finishing Palomino in the second round.[27]

On March 15, 2016, Gaethje was suspended indefinitely by the Colorado State Athletic Commission for “unsportsmanlike conduct” after he backflipped off the top of the cage in his post-fight celebration at WSOF 29.[31] The suspension was lifted a day later.[32][33]

Gaethje was expected to defend the WSOF Lightweight Championship against Ozzy Dugulubgov at WSOF 33 on October 7, 2016.[34] However, the bout was cancelled on the day of the event as Dugulubgov was stricken with illness.[35]

On October 17, 2016, it was announced that Gaethje would defend the WSOF Lightweight Championship against João Zeferino on December 31, 2016 at WSOF 34 in the main event.[36] However, an injury forced Zeferino to withdraw from the bout and he was replaced by Luiz Firmino.[37] Gaethje won the bout by TKO via doctor stoppage due to Firmino’s right eye being swollen after round three.[38]

On May 4, 2017, Gaethje announced he had vacated his WSOF title and signed with the Ultimate Fighting Championship.[39] It was announced on May 12 that he would make his debut against Michael Johnson on July 7, at The Ultimate Fighter: Redemption Finale.[40] Gaethje won the back-and-forth fight via TKO in the second round through a combination of punches and knees.[41] The win earned Gaethje the Fight of the Night and Performance of the Night bonus awards.[42] Sherdog named this fight as the best fight of 2017,[43] and round 2 of the fight as the best round of the year.[44]

On July 13, 2017, the UFC announced that Gaethje would coach The Ultimate Fighter 26 along with Eddie Alvarez, with the duo expected to face each other at the conclusion of the season.[45] The bout with Alvarez took place on December 2, 2017, at UFC 218.[46] Gaethje lost the fight by TKO in the third round, the first loss of his MMA career.[47]The fight also earned him his second consecutive Fight of the Night bonus award.[48]

Gaethje lost via TKO to Dustin Poirier on April 14, 2018 at UFC on Fox 29.[49] The fight earned Gaethje’s third consecutive Fight of the Night bonus award.[50]

Gaethje was scheduled to fight Al Iaquinta on August 25, 2018 at UFC Fight Night 135.[51] However, on June 28, 2018 Iaquinta withdrew from the bout and he was replaced by James Vick.[52] Gaethje won the fight by knockout in the first round.[53] He was also awarded a Performance of Night award, which was the fifth consecutive bonus award in his fourth fight in UFC.[54]