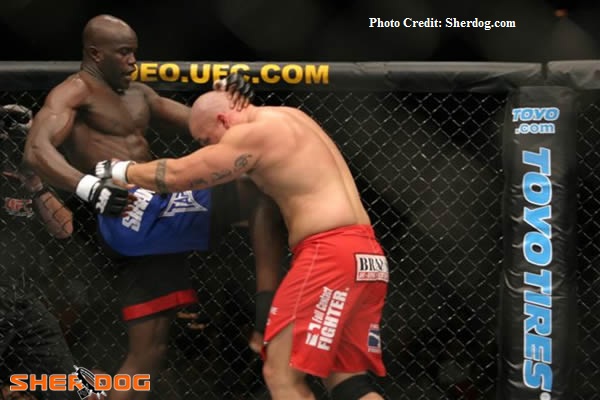 Background:
Cheick Kongo is one of the hardest hitters in the UFC heavyweight division, but has thus far fallen just short of vying for a possible title shot. Kongo utilized his kickboxing background to make a successful debut into mixed martial arts in 2001. Kongo built a 7-2-1 record on the European independent circuit, including winning 5 of his last 6 fights, his only loss coming to PRIDE veteran Gilbert Yvel. Kongo signed with the UFC in 2006 and made his debut against Gilbert Aldana at UFC 61. Kongo would defeat Aldana via 1st round TKO, quickly moving on to win in the same fashion over Christian Wellisch. Kongo’s weakness was soon revealed in his next fight as Carmelo Marrero used his wrestling to continually put Kongo on his back as Kongo lost via split decision. Kongo bounced back by picking up decision victories over Assuerio Silva and PRIDE legend Mirko Cro Cop. Kongo looked to be on the verge of title contention, but suffered a setback in his next fight to Heath Herring, losing another fight via split decision. Kongo’s career regained momentum following 3 straight TKO victories over Dan Evensen, Mustapha Al-Turk, and Antoni Hardonk. Kongo looked to stop the quick ascension of undefeated prospect Cain Velasquez at UFC 99. Kongo found success on his feet, rocking Cain multiple times throughout the fight, but Cain was relentless with his takedowns. Cain was able to score points with his ground ‘n’ pound to take home the unanimous decision victory. Kongo’s solid showing against Cain still had him in the mix, but Frank Mir quickly put an end to any title hopes by finishing him in the first minute of their fight at UFC 107. Kongo rebounded by defeating Paul Buentello before fighting to a draw against rising prospect Travis Browne. Kongo would have likely won a decision had he not been docked a point for holding onto Browne’s shorts. Kongo moved on to face fellow striker Pat Barry and in a rousing come-from-behind victory, Kongo scored the knockout after nearly being finished himself. Kongo looked to capitalize on his momentum by facing off against Matt Mitrione at UFC 137, but both men remained cautious throughout the fight. Kongo would end up winning a unanimous decision after pulling away in the 3rd round.

2011 Breakdown:
Kongo fought 2 times in 2011, winning both bouts, including a highlight-reel knockout finish of Pat Barry.
Kongo faced fellow striker Pat Barry at UFC on Versus 4 in what turned out to be the main event. Barry started out aggressively, coming straight towards in order to combat Kongo’s reach advantage. Barry connected on a huge right hand that sent Kongo to the floor. Barry went in for the finish, but Kongo somehow survived and tried desperately to grab hold of Barry. Kongo got back to his feet only to be dropped again. Barry continued delivering big blows and looked to be on verge of victory. Barry stepped away as Kongo barely got back to his feet. As Barry looked ready to reload, Kongo threw out a right hand that rendered Barry unconscious. Barry fell to the floor in one of the greatest come from behind victories in UFC history.
Kongo looked to extend his winning ways by facing TUF 10 alum and rising prospect Matt Mitrione at UFC 137. The 1st round saw both strikers hesitant to let their hands go. Mitrione pushed forward throughout the round, but looked tentative. Kongo connected on a couple of leg kicks, but otherwise seemed cautious as well. In the 2nd round, both fighters stepped up their activity as Kongo scored with leg kicks while Mitrione landed a few punches. Mitrione pushed forward and connected on a couple of punches that seemed to have Kongo in trouble, but Mitrione let him off the hook. Entering the 3rd round, neither man looked overly impressive or determined to finish the fight. Kongo landed a couple of punches early in the 3rd before scoring a big takedown. Mitrione was able to get back to his feet, but Kongo once again took him down and finished the fight landing some ground ‘n’ pound. Kongo easily took the 3rd round to win via unanimous decision.

2012 Forecast:
Cheick Kongo has made some great strides in his mixed martial arts career over the years. HIs wrestling has improved immensely, but Kongo still lacks the overall skills to be a championship contender. Kongo’s chin has come into question as of late as well. He seems to be shying away from punches, which is troubling considering his preference for striking. Though Kongo survived a barrage of punches from Pat Barry, he seemed to be beaten before he ever stepped foot into the cage. Kongo may be able to turn it around and make a run, but he is 36 years old and has struggled with back injuries. People forget that Kongo gave all Cain Velasquez could handle on the feet when they faced off in 2009. If Kongo can regain his confidence and willingness to trust his chin, there is no reason that he can’t work his way back into title contention.