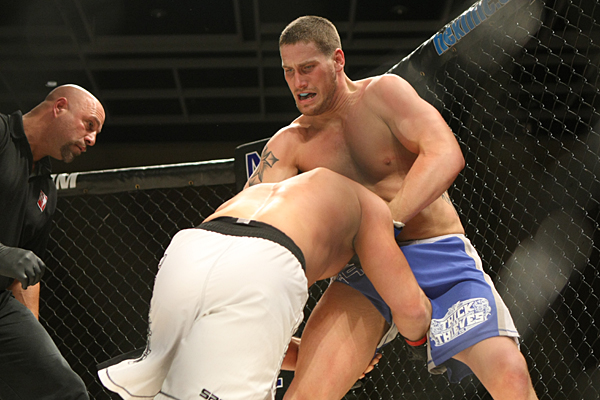 Many fans feel as if the UFC and matchmaker Joe Silva have dropped the ball when it comes to replenishing the ranks of the heavier weight divisions. There are a host of reasons for why that may be true.

Some claim that athletes over 6’0 tall and 200 lbs. are likely competing in other sports. Other common reasons I have seen thrown around are as follows: it is more difficult for heavier weight fighters to find fights on the regional circuit, finding suitable training partners, and suffer a much higher rate in fights ending in KO (shorter careers/more risk).

Here is just a small sample size of current light heavyweights that have thus far not signed with the UFC, Bellator, or WSOF.

Stansbury is the clear #1 LHW prospect in the world. Stansbury nearly had his shot in the UFC, but was injured in the elimination round of TUF 19. Stansbury was dominating his opening round matchup against Chris Fields, but he ended up suffering a significant knee injury that required surgery. Stansbury has made his way back to the cage, and recently picked up a dominating submission win over fellow top prospect Jeremy Osheim. Stansbury has power in his hands and is very accurate with his strikes. Stansbury is a finisher and he has natural athleticism. He will likely struggle with elite level wrestlers and more technical fighters, but at this point in his career, he absolutely deserves an opportunity to fight in the UFC.

Tomasz Narkun has yet to fight outside Europe, but the time may be coming where he tests his skills stateside. Narkun’s striking is still a work in progress, but once he gets his opponents to the ground, he becomes a completely different fighter. Narkun is aggressive on the ground, constantly looking to improve his positioning, landing strikes, and hunting for submissions. Narkun is not a physical specimen and could potentially stand to cut down to 185 lbs. in the future, but with a lack of battle-tested LHW prospects, Narkun clearly stands out.

Nemkov has already fought the best that Russia has to offer. After 27 fights in the sport, Nemkov has proven that he is tough, durable, and a well-rounded fighter. I highly doubt that Nemkov will ever make his way to the UFC, but if he did, I could see him holding his with anyone outside of the Top 10. His lack of size and strength would ultimately hold him back from beating elite competition. Nemkov is 11-1 since 2011, with his only loss coming via split decision to Stephan Puetz.

Edilov looks to be taking the next step in his career as he’s won his last 10 fights. What’s even more impressive is that all of those 10 wins have come via 1st round finishes. Despite being dominant, there’s still significant questions regarding Edilov’s ability to win at the highest levels. He hasn’t faced the most stellar competition as of late, and when he did face off against stiffer competition, he failed. It is obvious that Edilov has made the necessary improvements to his overall skill set. At just 23 years of age, Edilov could truly develop into a force if he aligns himself with a top gym.

Jake Butler was featured in my 2013 Prospects Series. He has yet to truly become a household name, but he is steadily making strides towards becoming the fighter I thought he could be. Butler’s wrestling is his bread and butter. As long as he develops serviceable striking, which still has not happened, I could certainly see him competing at the UFC level. Butler really reminds me of Chael Sonnen with his fighting style. He may not be the most entertaining fighter to watch, but few opponents at 205, will be able to deny his takedowns.