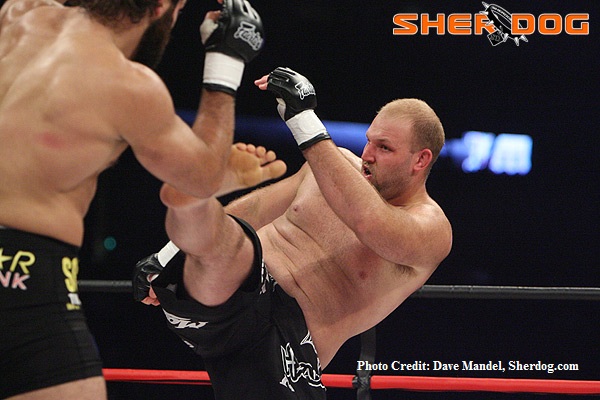 Background:
Ben Rothwell is one of the most respected, toughest veterans in the heavyweight division, highlighted by his 9-0 stint in the IFL. Rothwell made his mixed martial arts debut in 2001, quickly putting together an 11-1 run on the independent circuit with his only loss coming to future UFC champion Tim Sylvia. Rothwell would struggle to a 5-4 record in his next 9 fights as he faced off against stiffer competition. Ben rebounded with 4 straight wins before signing with the IFL as part of Team Miletich. Rothwell dominated the IFL heavyweight division, racking up wins over Krzysztof Soszynski, Devin Cole, Roy Nelson and Ricco Rodriguez. Rothwell moved over to the Affliction promotion in 2008 where he faced off with former UFC champion Andrei Arlovski. Rothwell was picked apart by the quicker Arlovski, but showed his toughness by hanging in there until eventually being knocked out in the 3rd round. Rothwell picked up a win on the independent circuit before signing with the UFC in 2009. Rothwell faced rising prospect Cain Velasquez in his debut at UFC 104. Rothwell struggled to combat Cain’s wrestling superiority and was eventually finished via punches in the 2nd round. After dropping out of a bout with Mirko Cro Cop due to illness, Rothwell finally made his return at UFC 115 against striker Gilbert Yvel. Rothwell used his wrestling to keep Yvel grounded to win a unanimous decision. Rothwell would once again sit idle as he was forced to undergo knee surgery. Ben finally made his return at UFC 135 against Mark Hunt, but suffered a stunning upset, losing via unanimous decision.

2011 Breakdown:
Rothwell only fought once in 2011 as he battled back from knee surgery.
Rothwell made his return to the octagon at UFC 135 as he faced off against striker Mark Hunt. Rothwell tried to shoot for the takedown early, but Hunt was there to deny him. Rothwell tried once again, this time quickly getting full mount. Hunt got back to his feet and stuffed a few more takedown attempts before pushing forward with punches. Hunt surprisingly ended up in top position, but not for long as they returned to the their feet before Rothwell took Hunt down, this time doing some damage with ground ‘n’ pound as the round came to a close. In the 2nd round, Rothwell once again looked for the early takedown, but Hunt stuffed it and countered with some big leg kicks. Hunt scored a big uppercut before following Rothwell to the floor. Hunt moved to side control before taking Rothwell’s back and firing off some punches. Hunt rolled for an armbar in the final seconds of the round, narrowly having it locked up before the round ended. Rothwell looked to be completely gassed as the 3rd round began. Hunt tagged Rothwell with punches as Rothwell desperately tried to take the fight to the floor. Hunt landed a big right hand before taking Rothwell down. The ref stood them back up, but Rothwell shot in once again. Rothwell briefly took Hunt’s back and then achieved full mount, but the round and fight came to a close. Rothwell ended up losing via unanimous decision.

2012 Forecast:
Ben Rothwell was always considered to be one of the top heavyweights competing outside the UFC, but once he arrived to the octagon in 2009 he seemed to be a shadow of his former self. Rothwell has never been the best athlete, but he was a tough, hard worker that helped him compete against top-level competition. Injuries and his lack of conditioning seem to have taken a large toll on Rothwell’s ability to compete at the UFC level. Rothwell can’t rely on his past laurels any longer. He will need to put together a solid 2012 year in order to keep his roster spot. Hopefully, Rothwell attempts to incorporate some type of strength and conditioning program into his training routine, otherwise he will be hard-pressed to find any easy fights in the UFC.